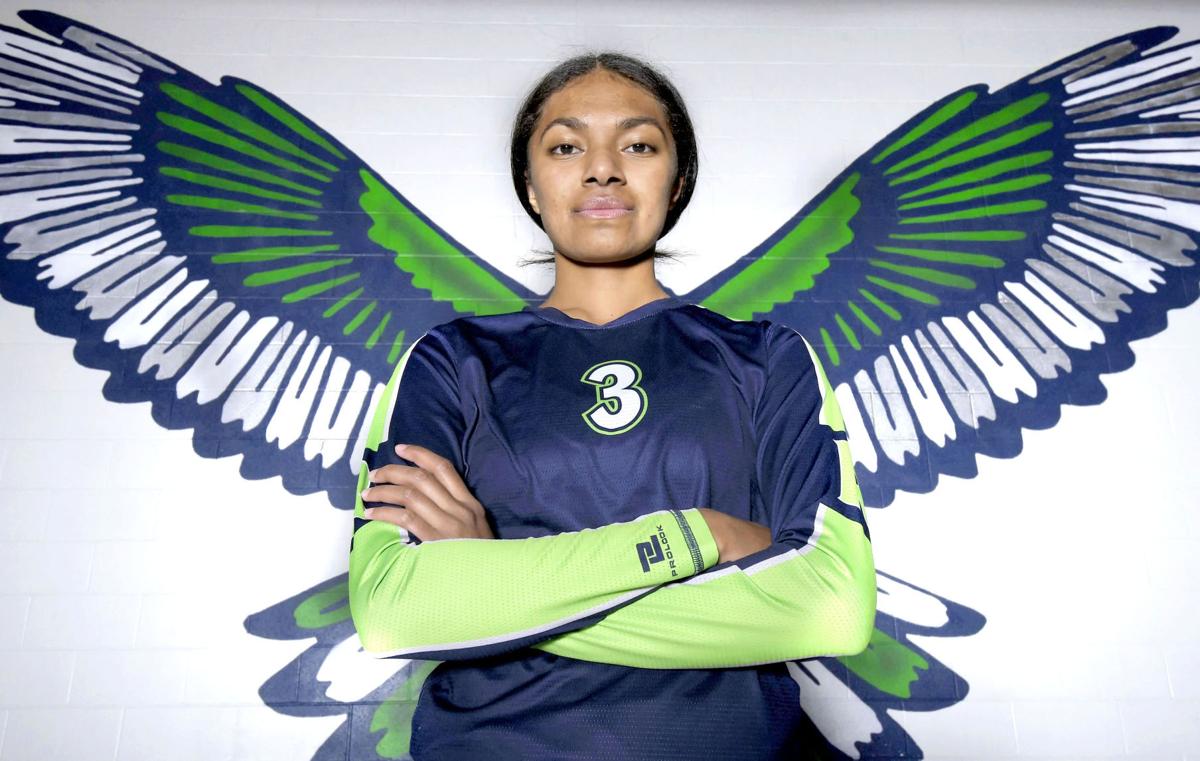 Ridgeline’s Nia Damuni is the Herald Journal’s All-Valley Volleyball Player of the Year. 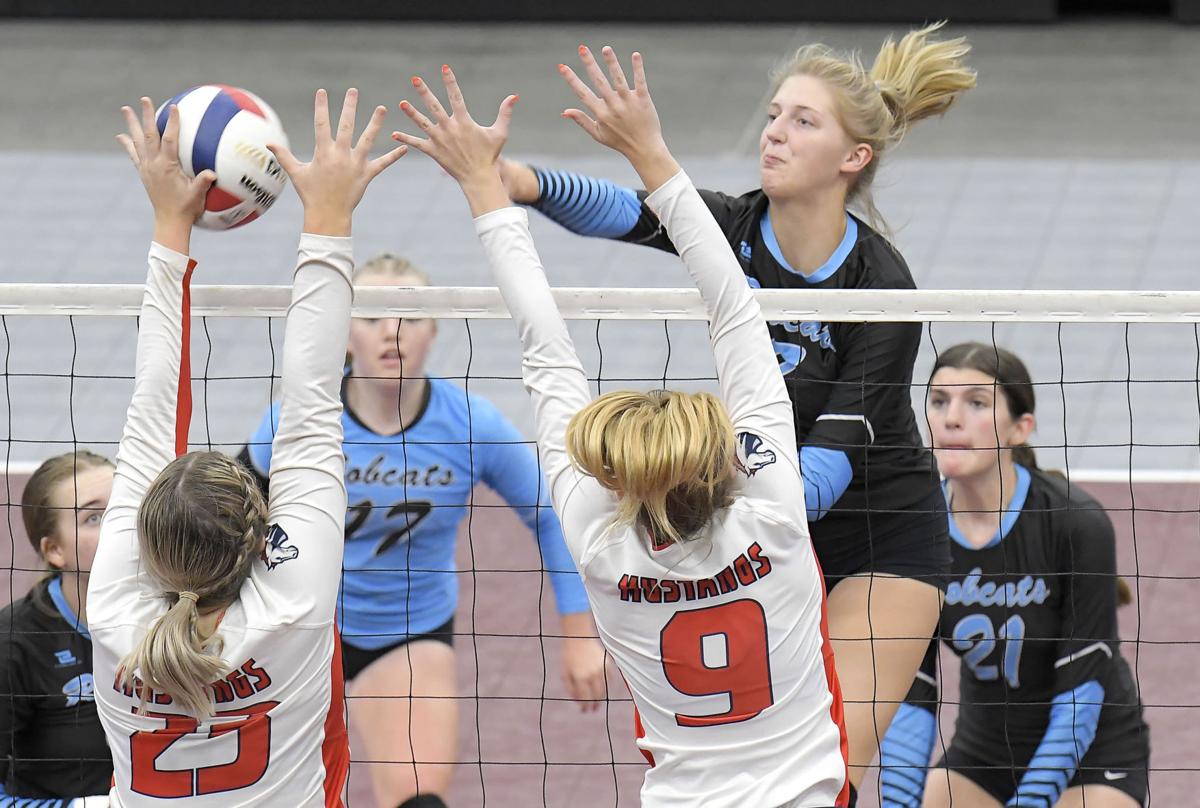 Sky View's Ella Bingham hits the ball as Crimson Cliffs' Daidy Hurst (23) and Callie Finlinson defend in the 4A state volleyball tournament on Thursday in Orem. 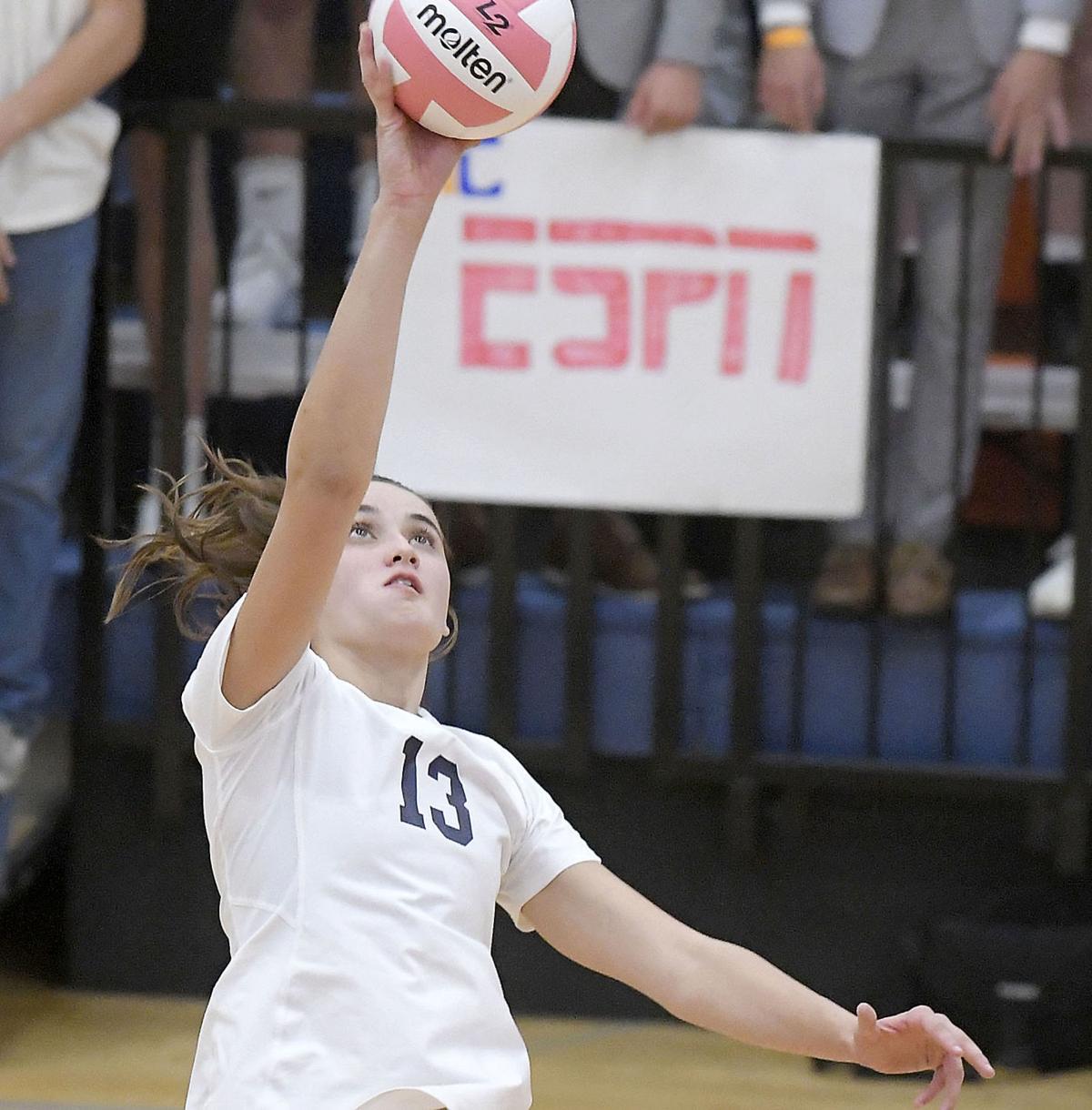 Mountain Crest's Ella Douglass hits the ball during a match against Ridgeline in Sept. 2021.

Ridgeline’s Nia Damuni is the Herald Journal’s All-Valley Volleyball Player of the Year.

Sky View's Ella Bingham hits the ball as Crimson Cliffs' Daidy Hurst (23) and Callie Finlinson defend in the 4A state volleyball tournament on Thursday in Orem.

Mountain Crest's Ella Douglass hits the ball during a match against Ridgeline in Sept. 2021.

MILLVILLE — It obviously took a team effort for the Riverhawks to capture their first-ever state title in volleyball this fall.

Second-year head coach Jaicee Roden preached team and playing for each other. The Ridgeline athletes bought in. Different players shined when needed as the Riverhawks captured the Region 11 title and then went on and became the 4A champs.

While it certainly was a team effort, one Riverhawk was the glue. It was never more apparent than at the state tournament.

Setter Nia Damuni calmly got the ball to the right hitter time after time and also seemed to know just the right time to attempt a dump kill. She served well and ran the offense like a veteran.

“Nia is a regular teenage girl and she faces the same challenges every other teenage athlete does,” Roden said. “However, she brought something different to the table at the state tournament. She was dialed in. She knew what she wanted, and she had a plan for how she was getting there. Nothing was going to stop her, and she showed that in her demeanor. When the lights went out in the gym for the final match, it’s almost like the lights in her head got brighter. She was clear in her purpose that weekend, and she did exactly what she was going after. I was proud of her ability to be poised in that kind of pressure setting.”

“The season has been the best,” Damuni said. “Our coach, Jaicee, said from the beginning if we all buy into the culture and work hard, we could make something big happen. That’s what we did. It was awesome.”

Once again there were two championship teams from Cache Valley as West Side won the 2A title in Idaho for the second straight year. Four schools in Utah finished among the top seven in the 4A ranks. The composure and leadership of Damuni made the junior stand out in a valley full of talent. That’s why she is The Herald Journal All-Valley Player of the Year for 2021, ending a run of nine straight Sky View players that have picked up the award.

“Oh, wow, that’s interesting,” said Damuni, when informed of SV streak. “... It’s an honor. Really, it’s my team. They worked really hard. Anyone on our team could get the same award.”

A year ago as a sophomore, Damuni garnered honorable mention All-Valley honors. The 16-year-old daughter of Waqa and Val Damuni has put in a lot of work in the offseason, and it showed this past fall.

“From the beginning, as a team, we just were working hard,” Damuni said. “... We ended last season in fourth. The next day we were working. Coach preached that we need to work hard the whole offseason.”

Like Roden has stated, Damuni was at the top of her game at the state tournament. The 5-foot-9 athlete has a hard time not sharing the spotlight with her teammates.

“It was everybody,” Damuni said. “Everybody came to the state tournament confident. That’s the best we have played. We came in and said no mercy. We rely prepared ourselves for pressure situations. You lose one game and you’re out. Everybody really came to play, it wasn’t just me. The whole team came ready to play.”

What does the coach think?

“Nia plays a consistent role for the team, and she does a nice job playing her role,” Roden said. “This year she was the glue to our offense, and as all hitters know, it’s so much fun hitting off of a talented setter. Nia really pulled things together for our offensive system, and it was obvious.”

In 91 sets this season, Damuni had 799 assists. She tries to pattern her game after a cousin, Silina Damuni, who is a setter for Timpview and has committed to BYU. The teenager also lists her parents and brothers as role models. Three of her brothers have signed to play Division I football.

“My parents have made a lot of sacrifices for me,” Damuni said. “My brothers are example to me. They work so hard and are in big places right now; they push me and give me advice.”

The Providence native has six siblings, including four older brothers, a younger sister and a younger brother. Family is important as she wears the No. 3, which all of her brothers and an uncle wore playing sports. Does she like being around so many boys?

“Growing up with brothers, we were always playing sports,” Damuni said. “There was no playing with Barbies.”

Damuni began playing volleyball in seventh grade as her parents urged her to give the sport a try. She had been playing soccer, but decided the running was too much. Her mother played volleyball in high school. The Riverhawk setter actually started as a middle blocker. A recreation league coach, Melissa Guyman, told her she would be a good setter in high school. She decided to give it a try.

Damuni credits Roden with working with her, as well as studying film of her cousin playing the position. She likes watching college volleyball and studying how the setters play. Another cousin, Sunny Mahe, has also been a role model.

“I’m glad I switched,” Damuni said. “I like setting. It’s a good position for me.”

She will get no arguments from Roden.

“How good can she get?” said Roden repeating a question and chuckling a bit. “I don’t even think Nia knows that. She wants to play ball at the next level, so I have no doubt that she will require that level of greatness for herself. She shows steady progress and constant coach-ability. Therefore there is no ceiling to her ability, and I’m excited to have a front row seat.”

Damuni was a starter on the girls basketball team last year, but has decided not to play this season. She is going to focus on playing club volleyball as a lot of recruiting goes on during your junior season. She plans to run track in the spring.

“I want to play college volleyball, so I’m focusing on that this year,” Damuni said.

So, what does it take to be a good setter?

“It takes a lot of reps, physically and also mentally,” Damuni said. “Knowing who to set and when to set them. Knowing how your hitters hit ... It works when all of our hitters are so consistent. They can all put the ball away. I can set anyone.”

Damuni also knows when to dump it. She had 69 kills this season, hitting .362.

“I just try to do it when they least expect it,” Damuni said.

The junior also had 40 aces, serving at 87.9 percent. She also finished with 28 blocks and 221 digs. Getting her back, along with several other All-Valley honorees, has Roden excited for 2022.

“My hope is that she shows another year’s worth of growth,” Roden said. “It will be a year to look forward to if Nia and her teammates decide to demand excellence of themselves.”

It should be another exciting season of volleyball in the valley for sure.

Like the Riverhawks, the Pirates were state champions in 2021. But this was not the 2A school’s first state title.

In fact, it was the fifth for the Pirates, who were repeat champions after also winning it in 2020. The Pirates went 35-4 in what head coach MeLinda Royer called a “magical season.”

Having an outside hitter like Mariscal certainly made it possible to repeat. She had 15 kills in the three-set championship victory against Melba.

“Every team needs a Jesse,” Royer said. “Jesse is a delightful volleyball player both on and off the court. Jesse makes amazing things happen. She showed great leadership throughout her three years on the varsity court.”

Mariscal also picked up this award in 2020 and improved her statistics from a year ago. The senior played in 112 sets this past season and finished with 463 kills, hitting .232. She served up 35 aces and had a serving percentage of 98.9 percent. Mariscal came up with 319 digs, made 28 blocks and also had 35 assists.

“I am excited to see her play in her college career,” Royer said. “She will be missed.”

Mariscal has signed to play at Yakima Valley College in Yakima, Washington, a two-year school.

This senior is also a repeat winner. Douglass has been honored the past three years.

“Ella has had such a huge impact at Mountain Crest, from her play on the court to being a great teammate and example to those she gets to play with,” MC head coach Kindra Anderson said. “She has done a great job of pushing herself and her teammates to be better while building relationships with girls from each age group.”

The middle blocker has been a force for the Mustangs, who finished seventh at state. The three-year starter has worked on her game and is much more than just a player at the net.

“She is a fierce blocker and reads the game really well,” Anderson said. “We made some rotation changes where she really stepped it up and not only put up great blocks both in the middle and right side, but also played really well defensively on the back row. It was a big change for her to do as a senior, but she took the challenge and really excelled.”

“Ella is a player that always has encouragement for her teammates and really values her relationships with them,” Anderson said. “Our underclassmen have really looked up to her and are lucky to have such a great example of what a great teammate and leader looks like.”

Anderson feels Douglass has what it takes to play collegiately. The Mustang is still weighing her options.

NEWCOMER OF THE YEAR

It was fierce competition for this award as there were a handful of good candidates. Bingham gets the nod as she played a big role in the Bobcats’ surge as the season wrapped up.

“Ella brings a confidence and calmness to the team,” SV head coach Sheila Sorensen said. “She is so fun to coach, and I get so excited to see how she will continue to do in the future.”

The Bobcats finished fourth at state after taking second in Region 11. They handed Ridgeline its only region loss.

The middle blocker played 109 sets for Sky View. She finished with 190 kills, hitting .224. The junior recorded 103 blocks and came up with 23 digs. She also had six assists.

“Ella has an amazing work ethic and attitude,” Sorensen said. “She has come on so strong this year and helped the success of our team. She has a great jump and sees the block really well.”