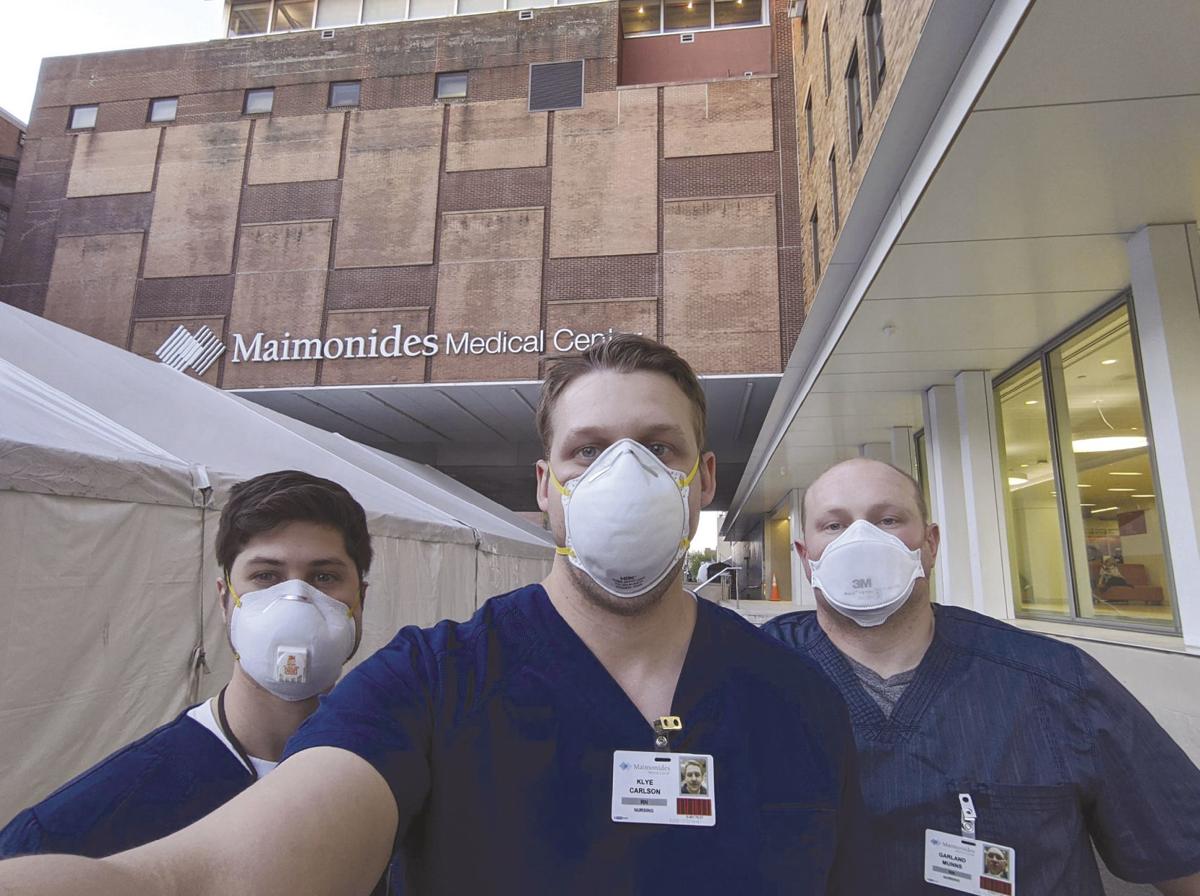 Garland native Garland Munns (right) poses for a picture with colleagues Kyle Carlson (center) and Felix Salomone on the last day of a month-long stint at Maimonides Medical Center in Brooklyn, New York. Munns worked at the hospital as a travel nurse, providing care for COVID-19 patients and supporting hospital staff that were overwhelmed by the pandemic. 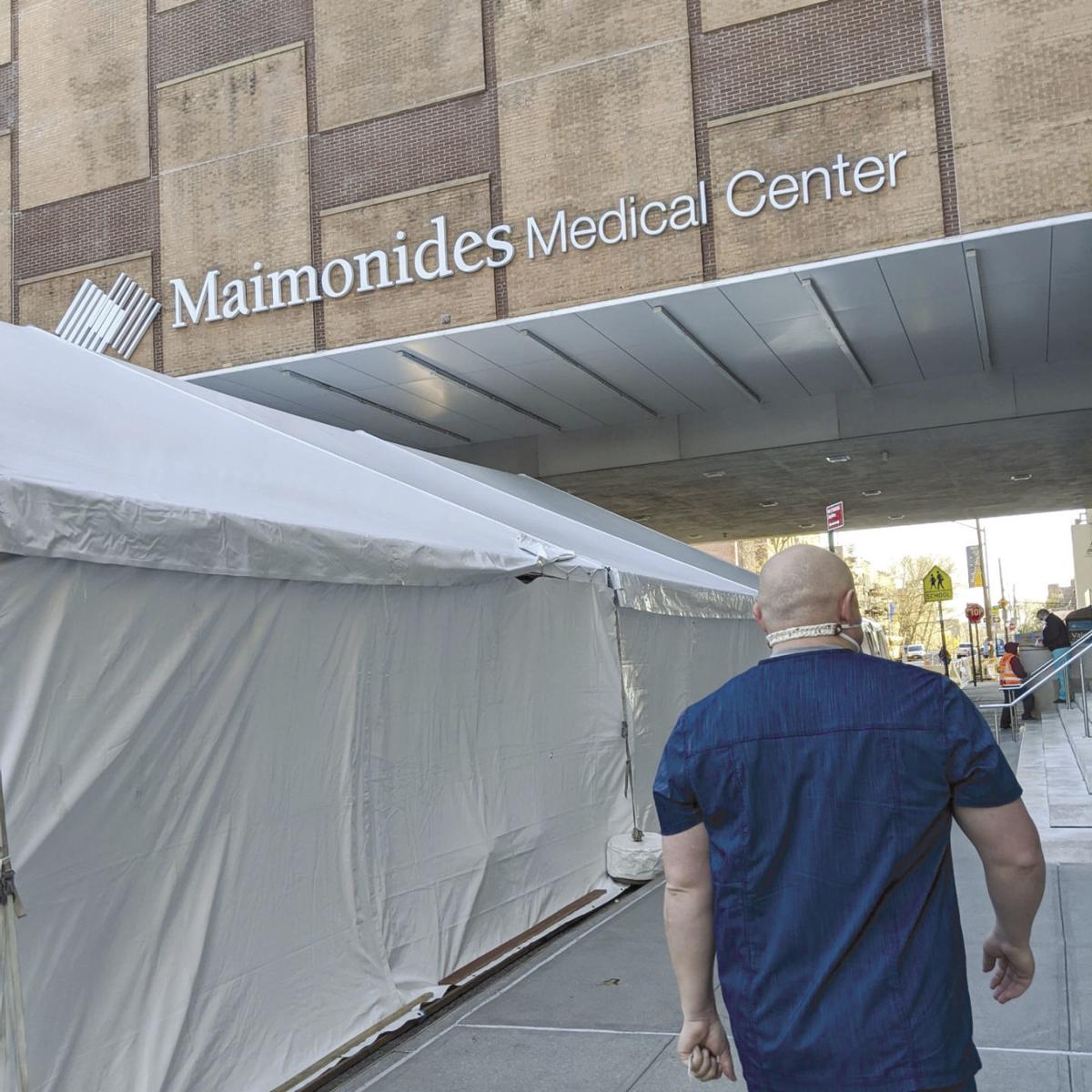 Garland Munns walks into Maimonides Medical Center in Brooklyn, New York on his first day there as a travel nurse providing support during the COVID-19 pandemic. 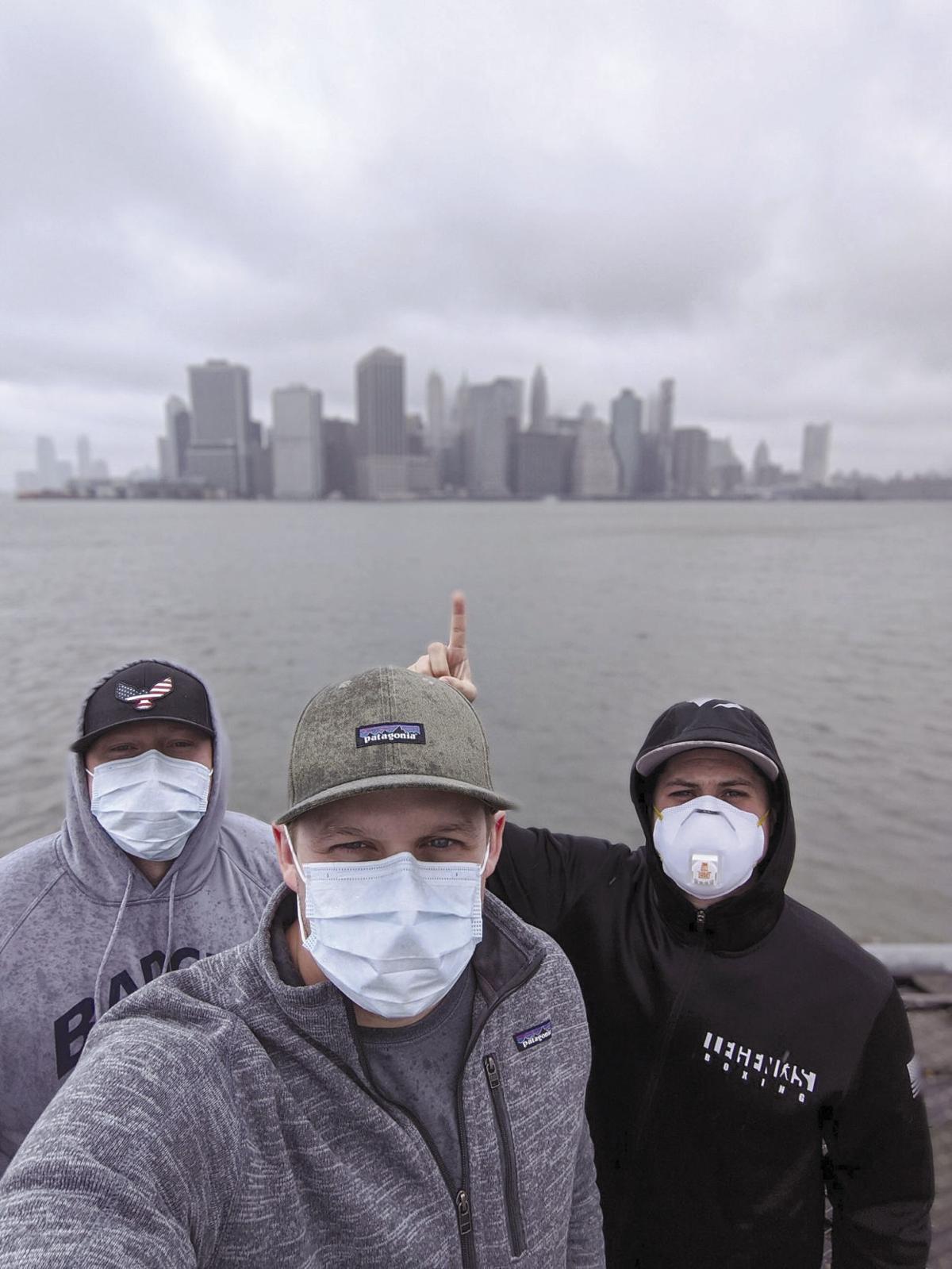 (Left to right) Garland Munns, Kyle Carlson and Felix Salomone pose for a picture with the Manhattan skyline in the background. 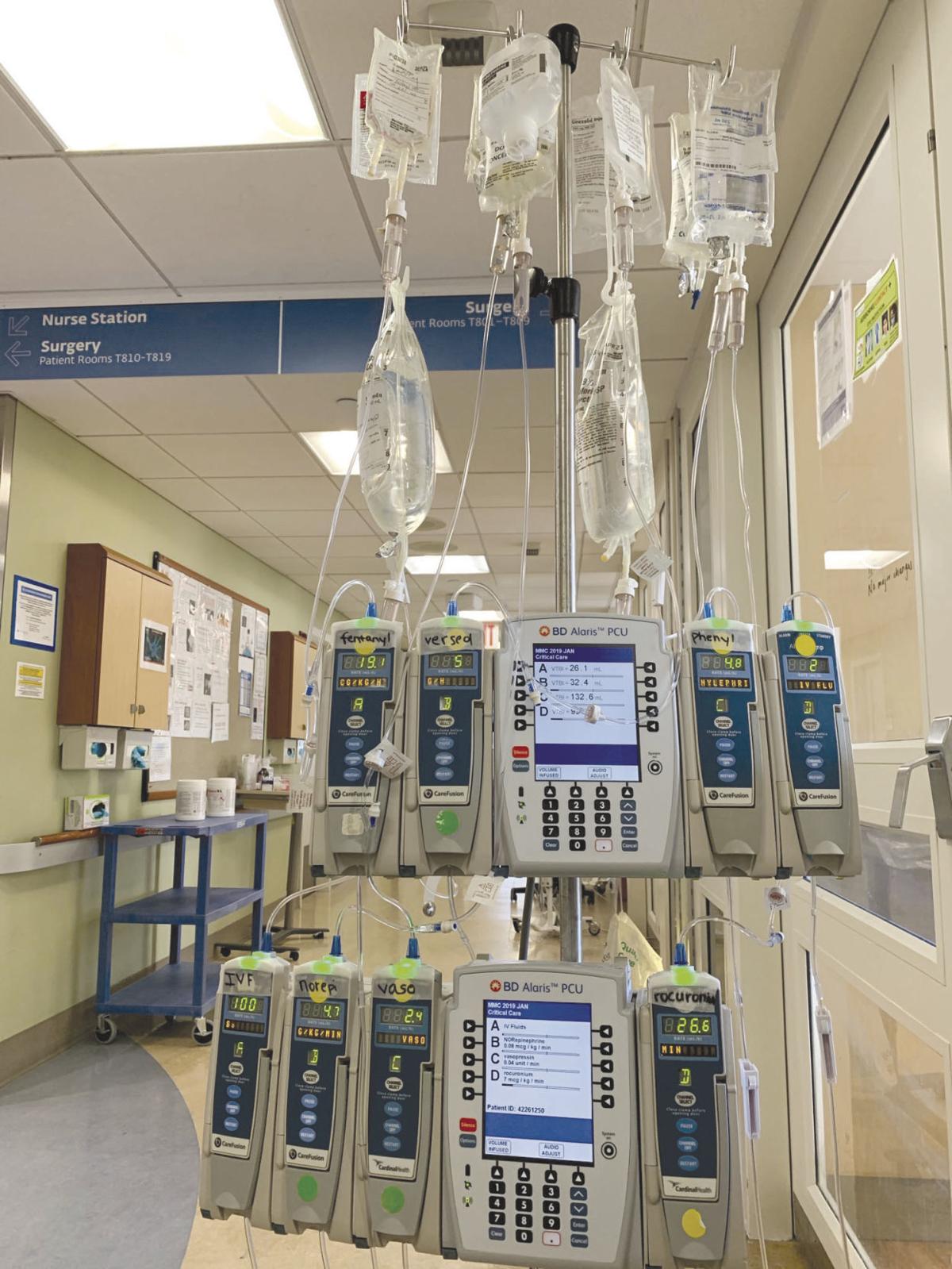 This picture provided by Garland Munns shows equipment used to administer various medications to COVID-19 patients at Maimonides Medical Center in Brooklyn, New York. "That pole is all for one patient," Munns wrote.

Garland native Garland Munns (right) poses for a picture with colleagues Kyle Carlson (center) and Felix Salomone on the last day of a month-long stint at Maimonides Medical Center in Brooklyn, New York. Munns worked at the hospital as a travel nurse, providing care for COVID-19 patients and supporting hospital staff that were overwhelmed by the pandemic.

Garland Munns walks into Maimonides Medical Center in Brooklyn, New York on his first day there as a travel nurse providing support during the COVID-19 pandemic.

(Left to right) Garland Munns, Kyle Carlson and Felix Salomone pose for a picture with the Manhattan skyline in the background.

This picture provided by Garland Munns shows equipment used to administer various medications to COVID-19 patients at Maimonides Medical Center in Brooklyn, New York. "That pole is all for one patient," Munns wrote.

Around the beginning of this year, Garland Munns had moved back to his hometown and namesake of Garland, and was working as a nurse at Intermountain Bear River Valley Hospital in Tremonton when he got a call from a friend in the Salt Lake City area.

Within a few days, Munns was on a plane, heading for an assignment in the epicenter of the COVID-19 outbreak in the United States.

A couple of friends and former coworkers at Intermountain Medical Center in Murray had tracked down a four-week assignment at a hospital in Brooklyn, New York, where the staff was being overwhelmed with patients infected with the new coronavirus.

Four weeks is a relatively short assignment for travel nurses, who typically enter into eight- or 12-week contracts, but with the situation in New York as dire as it was, hospitals there were willing to offer shorter stays.

As northern Utah wasn’t being hit too hard by the outbreak, Munns decided the right thing to do was to go where he was needed most.

“I knew I had the ability to help,” Munns said by telephone last week during his last day in New York. “We weren’t too busy (in Tremonton) and these guys were getting hammered. If I had the ability and skill set to do something, I felt like I needed to do that.”

He said his boss at the Tremonton hospital, Leslie Garn, was told him to “100 percent go for it,” even though the staff there were concerned for his welfare.

“I called her on a Sunday and said I had already signed the contract,” he said. “On Thursday, we were getting on a plane and flying out. She fully supported me and helped me.”

The airline JetBlue provided a free flight for Munns and two former coworkers, Kyle Carlson and Felix Salomone. Munns had never been in the heart of New York City, and his first impression was certainly not what a typical tourist might see.

“It just seemed empty,” he said. “We got an Uber and I was expecting New York traffic, but there were minimal cars on the road.”

Even if he had been familiar with the city, nothing could have prepared Munns for what he saw on the first day he, Carlson and Salomone walked through the doors at Maimonides Medical Center in Brooklyn.

He arrived at the hospital at 8 a.m. to begin two days of orientation, on a day when about 90 other travel nurses also arrived. Two days before that, another group of similar size had showed up, and there were around 300 to 400 temporary travel nurses working at that hospital alone.

When Munns arrived, an estimated 90% of the hospital’s patients were COVID-19 patients, with the rest being mothers about to give birth.

“The only other people allowed in the hospital were moms that were delivering,” he said. “This hospital delivers more babies than any other in New York.”

Munns arrived after the peak of the outbreak, but the situation was still hectic. During his orientation, one of the educators at the teaching hospital said that during a single week, the hospital went from its usual 700 beds to about 1,400. That included five to 10 makeshift intensive care units set up in areas that would normally be post-anesthesia recovery areas for people getting out of surgery, but were converted on the fly specifically to deal with the influx of COVID-19 patients.

“They already had the monitors to hook people up to, so that’s how they set it up,” he said.

While the actual peak had already passed, demand was still so high that Munns and his roommates received a phone call at 5:30 a.m. the day before their first shift was supposed to begin, asking if they could come in and work.

During his first day on the job, someone would come on the loudspeaker approximately every 30 minutes saying “Code 3,” which meant someone had gone into respiratory arrest and needed to be intubated and hooked up to a ventilator. The ventilators were in such short supply that many patients were connected to portable units that are typically used only in ambulances.

The shortage of medical personnel was also evident, as nurses that would typically be handling one critical patient at a time were racing back and forth between four or five patients. Floor nurses were taking on about 10 patients at a time — double their usual workload.

Sometimes a patient would code, and couldn’t be moved to the ICU because there was no room, he said. Patients that were on continuous renal replacement therapy (essentially emergency dialysis) were having share machines, with nurses switching them from one patient to the next every eight hours — definitely not ideal, considering that the word “continuous” is literally part of the name of the therapy.

“It was just doing whatever you had to do to keep the patient alive,” he said.

He couldn’t confirm it, but said there were rumors circulating that some patients had died because there simply weren’t enough ventilators to around.

Munns was assigned to an ambulatory surgery area that had been converted into an ICU. He was fortunate that another group of travel nurses had arrived a couple of days before, so he was able to shadow someone who had already learned the ropes.

Before he and his colleagues showed up, the nurse he was shadowing said she was working with one other nurse to handle 14 patients who were on drips and ventilators, all in one large, open room with no partitions.

“They were lucky to see three nurses walk through the door,” he said. “I never had more than two patients, and even those two were some of the hardest and busiest work I’ve ever encountered as a nurse. It was a true crisis nursing situation.”

Dressed in full protective gear from head to toe, it got so hot while working that Munns requested to be transferred to another area where he didn’t have to wear the full body suit.

“To be honest, I couldn’t hang,” he said. “I’m already big as it is, so you put me in a garbage bag, it was so hot, it kicked my ass. You couldn’t take any gear off in that room.”

He was talking with some other nurses on his first day who said that only one of their patients had made it out after being put on a ventilator, and that was a 24-year-old trauma case.

Maimonides Medical Center alone had more than 1,000 patients diagnosed with COVID-19, many of them with a history of other medical issues, “so if you needed the ICU, you were already super sick,” Munns said. “Put the COVID on top of that, and …” his voice trailed off.

By the time his last week on assignment came around, things had slowed down a lot. Munns’ last two patients were not even COVID-19 patients, and the makeshift ICUs had begun to revert to their normal functions.

As things slowed down and the nurses were able to stop and catch their breath, Munns was able to talk to more of them about their experiences.

“Some had been travel nurses whteir whole careers, and they said this is like nothing they had ever seen before,” he said. “It was nothing remotely close to the norm.”

He said he’s done things that were tougher physically or mentally, “but it was emotionally one of the toughest things I’ve had to do. Seeing the condition those patients were in, and knowing they weren’t allowing visitors in, so the family doesn’t have those last moments to be with them, it was hard.”

Munns flew back to Utah last Friday, where he was waiting in quarantine for coronavirus test results before returning to work at Bear River Valley Hospital. He will turn 32 this year, and is getting ready to go to Arizona to become a certified registered nurse anesthetist and continue his medical career. But the experience he gained in only a month’s time in New York is the kind of thing that can’t be learned in the classroom.

“I’m definitely glad I did it,” he said. “I didn’t have an excuse not to. The way I see it now, you think you’re coming out to help patients, and I don’t know if I helped that many, but the reason I came out here was to help the nurses. My job was to take the stress and workload off of them. Maybe that’s the good I did.”