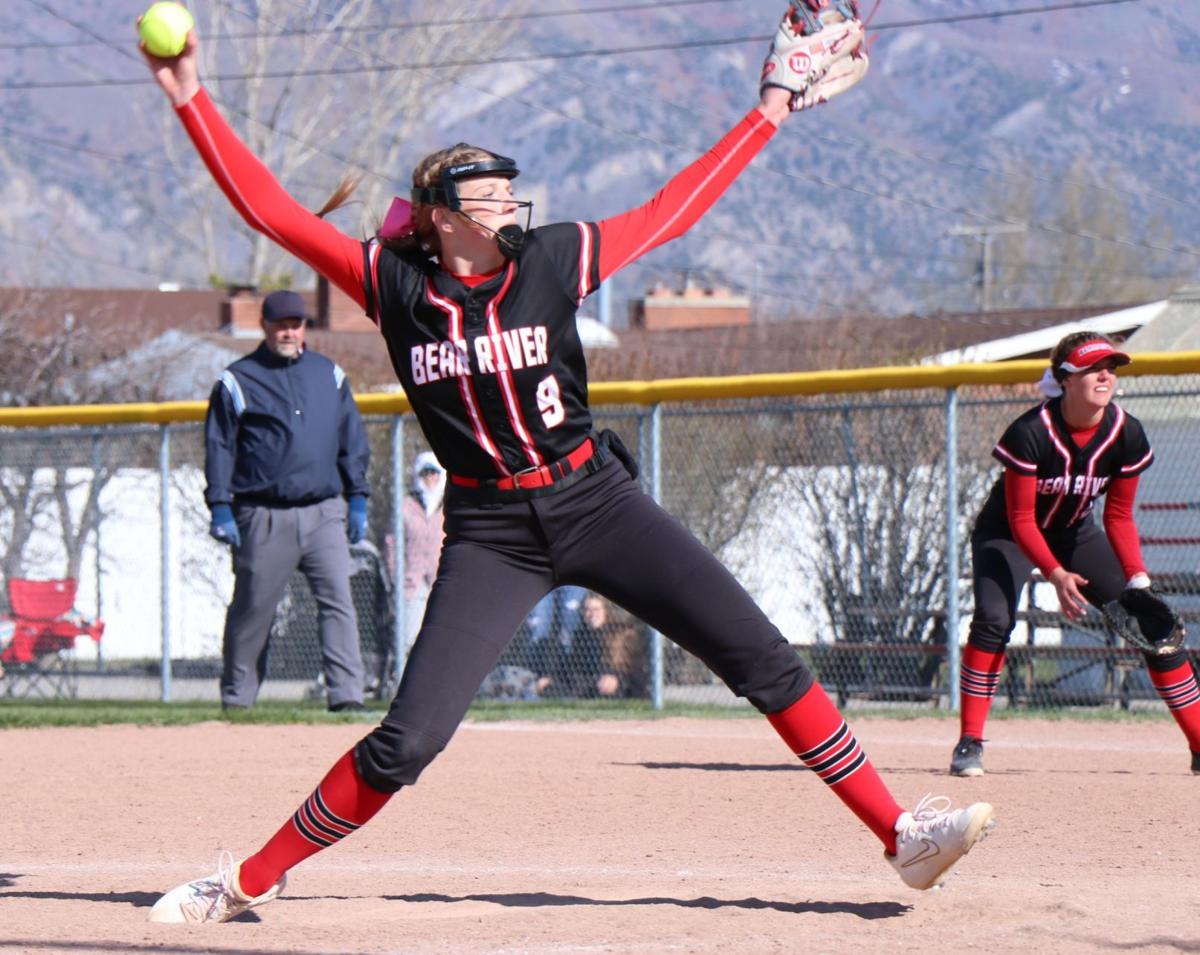 Bear River’s Kate Dahle got the win in the circle against Tooele on Monday, April 19. 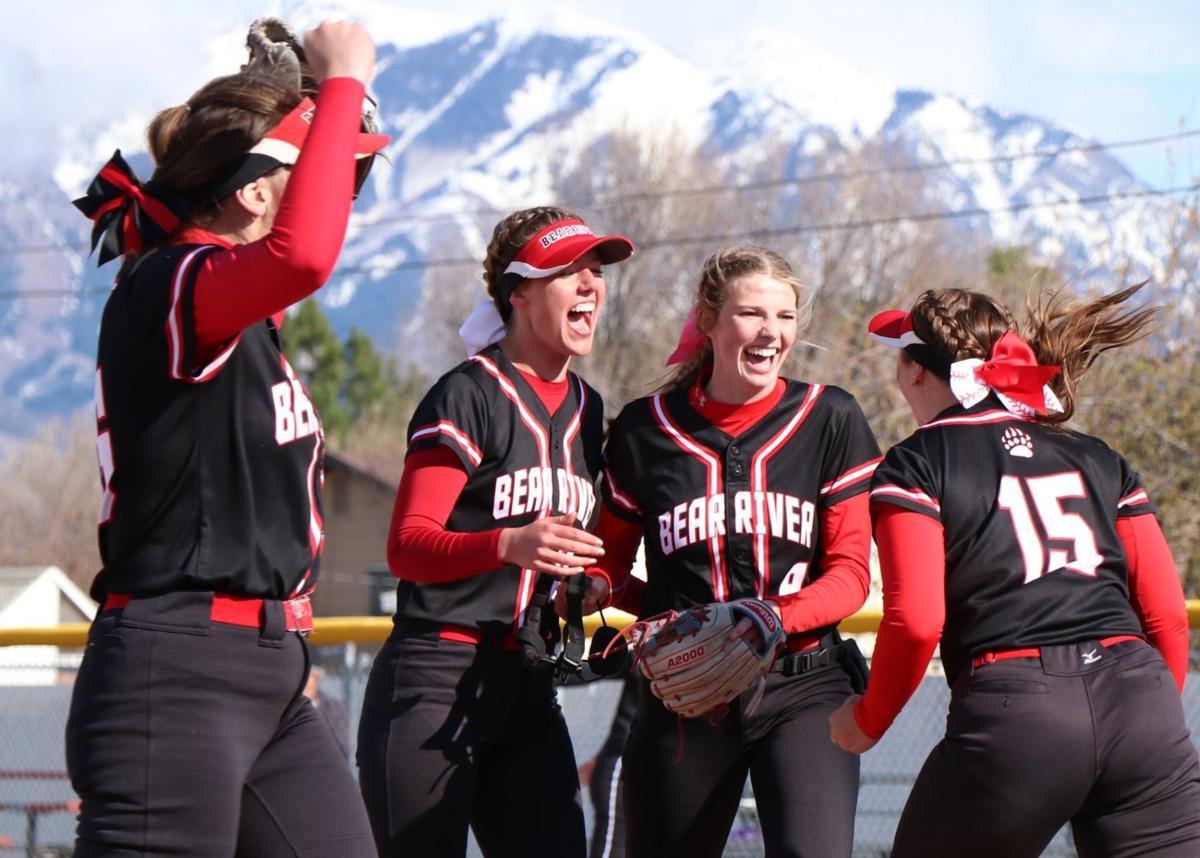 Bear River’s Kate Dahle got the win in the circle against Tooele on Monday, April 19.

Last week was a busy one for the Bear River softball team, which played eight games over the course of six days.

The Bears proved they were up to the task, going 7-1 in those games and further cementing their status as the alpha squad in Region 11, as well as a leading contender among all 4A teams.

The week started off with a clash of 4A titans as the Bears hosted Tooele on Monday, April 19. The game remained scoreless until the Buffaloes plated two runs in the fourth inning on a single followed by a bunt.

Still trailing 2-0 heading into the bottom of the sixth, Bear River broke through with three runs by playing small ball and taking advantage of a couple of fielding errors by the visitors.

Olivia Taylor beat the throw to first base on a well-placed bunt, Oaklee Maxfield doubled on a fielding error at second base, and Kate Dahle’s bunt scored Taylor. Another bunt by Kortnie Burton brought home Kaya Town and evened the score. The defense bobbled a ground ball from Cami Gibbs, allowing Burton to score the go-ahead run.

Dahle kept the visitors in check from the circle in the top of the seventh, forcing two flyouts and getting a strikeout to deliver the win.

The win confirmed the Bears’ status among the 4A elite and set the tone for the rest of the week.

Things got easier on Tuesday, when the Bears traveled to Logan to take on the Grizzlies and got back on the bus early after cruising to a 19-0 win in just three innings. The Bears scored 15 times in the top of the first, then added three runs in the second and another in the third.

The Bears recorded 17 hits, nine of the extra-base variety. Kynlei Nelson, Oakley Maxfield and Carlee Miller each had three base knocks for the visitors. Maxfield had a pair of doubles and a home run, and Nelson had a double and triple. Jordyn Warren got the win in the circle.

There was little time to celebrate the blowout region win, as Bear River had to turn around the next day and head to Spanish Fork to take on the Dons, the top-ranked team in the 5A classification and a perennial powerhouse.

Spanish Fork, which has lost just once all season in a 1-0 setback to Tooele on April 16, used a well-balanced effort to snap an 11-game winning streak by the Bears and hand the visitors their fourth loss of the season in an 8-5 win.

The game was tight throughout, with the Dons clinging to a 4-3 lead heading into the sixth inning. The Bears scored twice in the top of the sixth to briefly take the lead, but the home team brought four runs home in the bottom of the inning and shut the Bears out in the top of the seventh to preserve the victory.

After a rare day off, the Bears were back in region action on Friday as they hosted Ridgeline.

Things looked a little shaky for the home team in the early going, and the Riverhawks held a 4-1 lead heading into the bottom of the sixth inning. That’s when the Bear River bats came alive as the Bears proceeded to score five runs in that frame to take their first lead, then shut the visitors out in the seventh to seal the win and complete the season sweep of Ridgeline.

Kynlei Nelson’s double to left field in the sixth plated two runs and gave the Bears the lead for good. Dahle was the winning pitcher.

The week wasn’t over, as the Bears hosted four non-region games on Saturday in Garland as part of the Cache Valley Invitational. If they were exhausted from all the action earlier in the week it didn’t show as Bear River won all four games, beating Canyon View 8-6, Skyridge 8-1, Grantsville 6-3 and Wasatch 4-3.

Heading into this week, the Bears’ record stood at 18-4 overall, including a perfect 7-0 mark in Region 11 and a two-game lead over second-place Ridgeline. Bear River is closing in on the region crown as the team was scheduled to play three games on the road this week, traveling to Smithfield on Tuesday, Herriman on Wednesday and Green Canyon on Friday.

The Bears are slated to close out the regular season schedule with a home game against Mountain Crest on Tuesday, May 4.