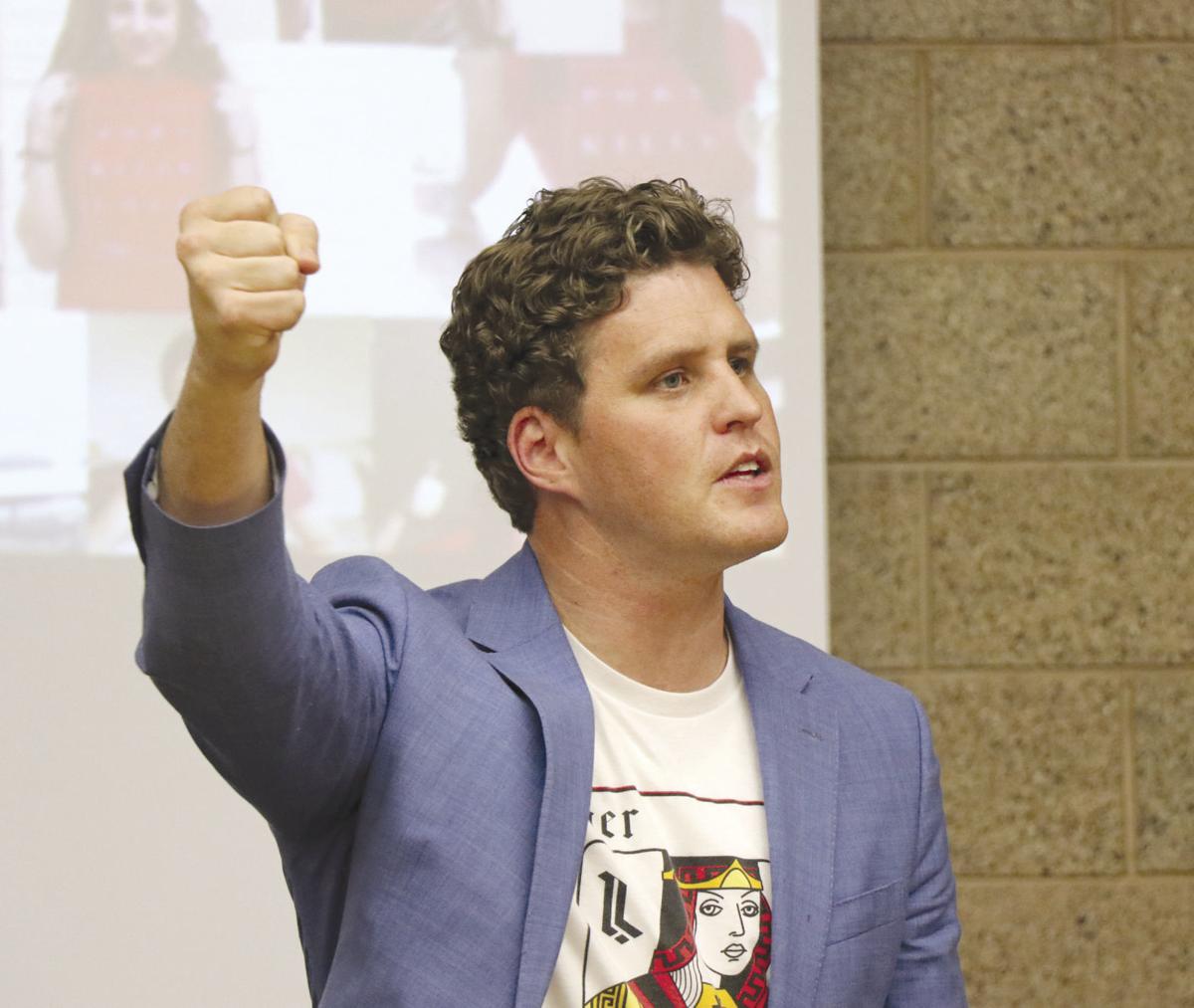 Clay Olsen, co-founder of Fight the New Drug, speaks about the dangers of pornography to youth Friday, Feb. 7 at Bear River High School. 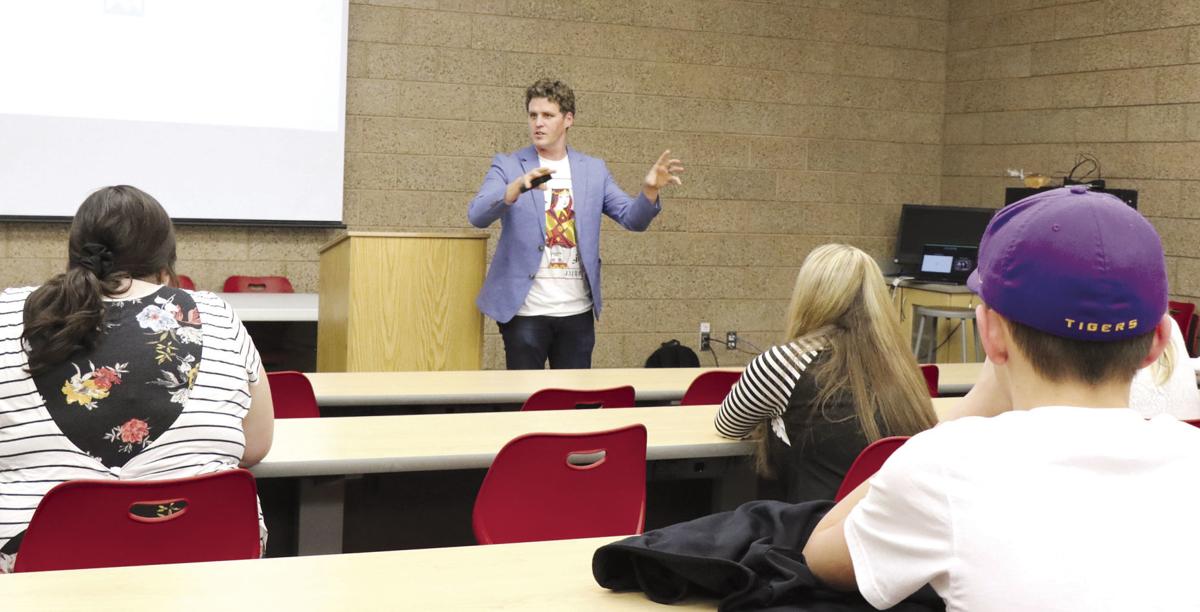 Clay Olsen, co-founder of Fight the New Drug, speaks about the dangers of pornography to youth Friday, Feb. 7 at Bear River High School.

One of the founders of a group that aims to educate young people about the dangers of pornography visited Bear River High School last week to spread his organization’s message to a group of young teens and parents.

Clay Olsen, who co-founded Fight the New Drug in 2009, came to town last Friday armed with some alarming statistics about how pornography has grown and changed in the digital age, and how it is reaching kids at younger and younger ages as the multi-billion dollar industry evolves.

Olsen said that in 2008, about 15 percent of boys aged 12 and under had viewed some sort of pornographic material for the first time. In 2016, that number had risen to almost 50 percent, and in 2019, to nearly two-thirds of boys that age.

“It’s not like it’s always been this way,” Olsen told the young people in attendance at his presentation. “You guys are dealing with this issue to an intensity and scale that no generation in the world has ever seen.”

Since then, he said it has found its way into more than 150 countries and has more than 5 million followers around the world.

“What we wanted to create 10 years ago was a movement,” Olsen said, “not just in the form of an educational organization, but a movement where young people can take ownership and say ‘We can do this. Let’s fight for real love and avoid the hollow counterfeit that is pornography.’”

He said the proliferation of pornography in the digital age has become so insidious that kids are being exposed to it at age nine, or even younger.

“The younger they are exposed to this, the more impressionable they are,” he said. “What does that teach them about love and intimacy and relationships that is completely shaping them in the opposite direction from what is healthy?”

Fight the New Drug’s most recent big projects include a new phone app called Fortify that young people can use, and a three-part documentary called “Brain, Heart, World” that focuses on three major ways in which pornography is having a negative impact. The first part focuses on how it is impacting individuals on a neurological basis, the second on how it’s affecting peoples’ relationships and connections with each other, and the third on how it’s affecting society and the world at large.

Olsen showed the “brain” part of the film to last Friday’s crowd. It focuses on the stories of three young people who talked about how they first came into contact with pornography, how they got hooked on it, and how they ultimately were able to distance themselves from it. It also features several experts who describe how pornography can be every bit as addictive as a drug.

“Individuals that consume this content need more, more often and more extreme content to just to maintain their level of normality,” he said, “so again it kind of pushes the boundaries, so over time we go into areas we didn’t think we would in the past. It’s not a good trajectory, obviously, and we can do something about it.”

The latter part of Olsen’s presentation was directed at parents — specifically, how to approach their kids about the subject and help them through the temptations and pressures that surround them.

He said parents typically have three main questions: “When should I talk about it, how do I bring it up, and what should I say?”

To answer the first question, he used a phrase that he repeated several times throughout the presentation: “Sooner than you think.

“If they are accessing the internet on their own, you already ought to have had these conversations,” he said.

It’s critical to make it an ongoing conversation instead of just a one-time event, he added.

To the second question, he said, “first of all, stay calm and breathe.

“The more we can look at this in a non-emotionally reactive way, the better the result is going to be,” he said. “Make it natural. If you’re sitting in a restaurant and see something inappropriate and you know your child saw it, don’t pretend it’s not there. Use it to open a conversation about what is and what is not healthy.”

As for the third question, he said it’s important to ask questions and listen.

“You don’t actually say a whole lot,” he said. “Don’t come out lecturing. Find out what they know, what they think they know, what misconceptions they have, and understand where they’re at, so that you, based on your education and awareness, can come back and formulate a response based on that understanding.”

As part of that, he talked about what not to do.

“Don’t assume your child is an addict,” he said. “We need to stop talking about the word addiction like an on-off switch, and look at it more like a dimmer switch — a spectrum of struggle.”

He also said it’s important to avoid shaming them.

“That is toxic to their capacity to not only address the challenge, but to overcome that challenge,” he said. “We need to respond with love and support and understanding and encouragement to move in a healthy direction.”

It’s also important for parents not to blame themselves if a child gets caught up in pornography.

“We have to recognize that they are being pushed from behind with enormous force in our current culture,” he said. “It is not your fault.”

Olsen said that while the world of pornography presents an ever-increasing challenge for today’s youth, there has been substantial progress, and Utah has been at the forefront as the first state to officially declare it a public health risk.

“Now 16 states have passed the same declaration,” he said. “It’s just like what we’ve done with tobacco. Do people still smoke? Of course they do, and they have a right to, but now they’re aware of the potential risks and consequences. We haven’t really done that with this topic, but it’s happening slowly.”

That, he said, is cause for optimism.

“There is hope in all of this. It’s not all doom and gloom.”