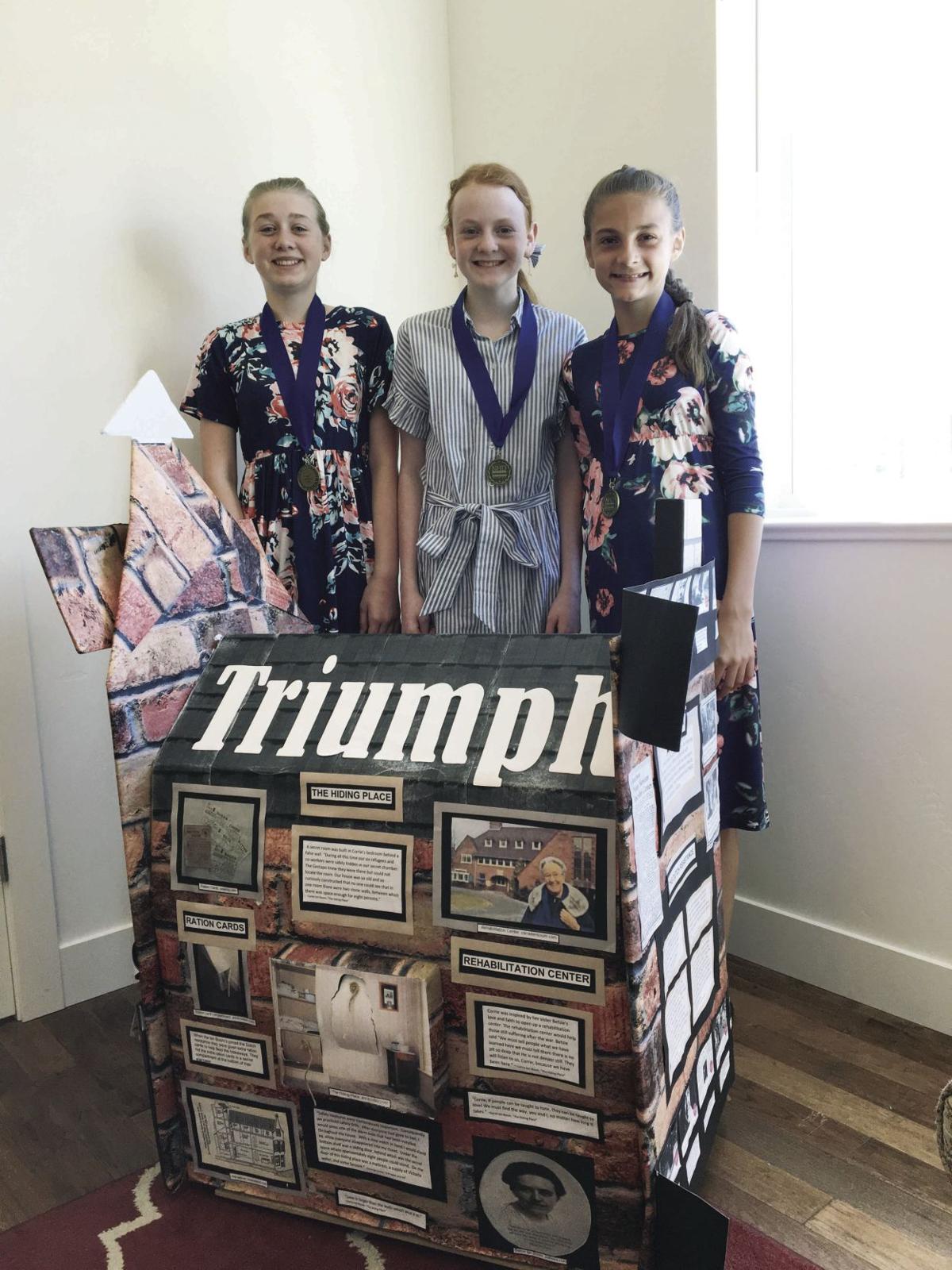 Emma Peterson, Kate Black and Chloe Cammack will compete at a national competition for their National History Day group exhibit that took first place at the state and region levels. All three girls are in seventh grade at Alice C. Harris Intermediate School in Tremonton. 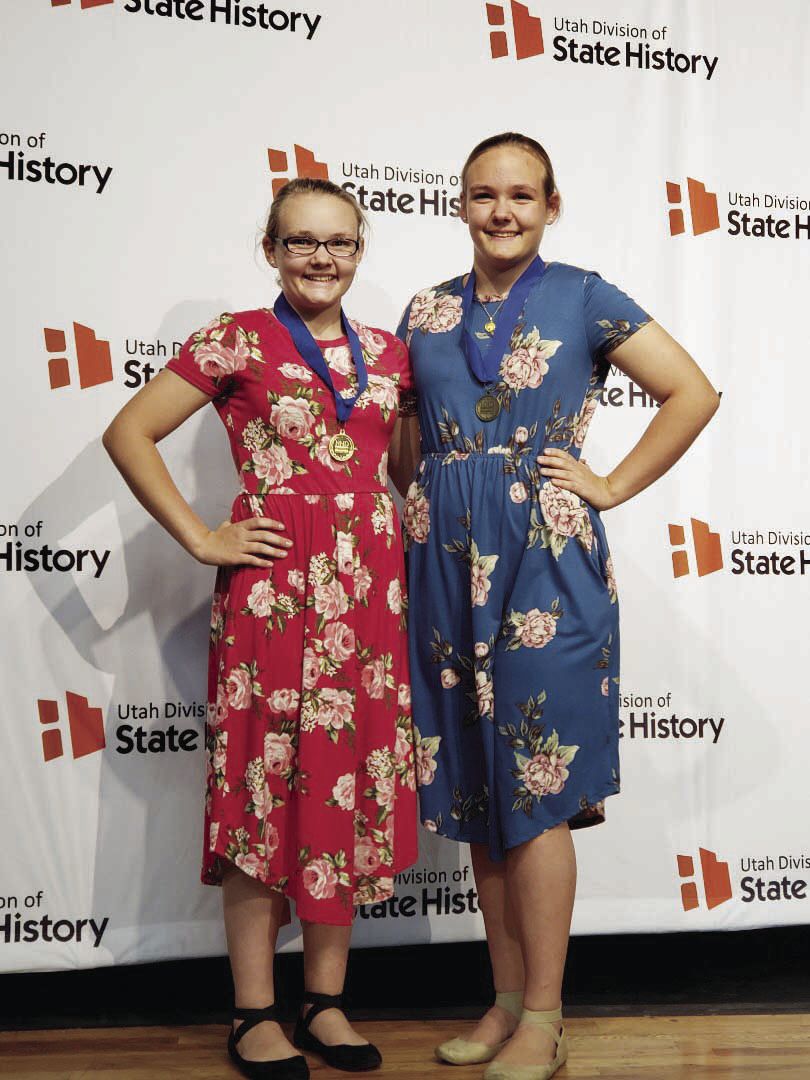 Sisters Amelia Goodwin and Rachael Goodwin will compete at a national competition for their National History Day group project, a website on the transcontinental railroad, that took first place at the state and region levels. They are both seventh graders at Alice C. Harris Intermediate School in Tremonton.

Emma Peterson, Kate Black and Chloe Cammack will compete at a national competition for their National History Day group exhibit that took first place at the state and region levels. All three girls are in seventh grade at Alice C. Harris Intermediate School in Tremonton.

Sisters Amelia Goodwin and Rachael Goodwin will compete at a national competition for their National History Day group project, a website on the transcontinental railroad, that took first place at the state and region levels. They are both seventh graders at Alice C. Harris Intermediate School in Tremonton.

Five students at Alice C. Harris Intermediate School will have the chance of a lifetime to visit Washington D.C. this summer and show off their knowledge of history and their hard work at the same time.

This year two different groups of students from ACHIS, one participating in the junior group website category and the other in the junior group exhibit category, were both selected to represent Utah in the national competition as part of National History Day’s annual contest June 9-13, 2019, at the University of Maryland College Park.

Box Elder County competes in a region with Cache County students with that contest being held on March 12, at Utah State University. From there the top two projects continue on to compete in the state competition, which was held on Friday, April 26, in Salt Lake City.

There are five different categories; documentary, exhibit, paper, performance and website with specific instructions on how to complete the project. The contest is open to students in 4th to 12th grades.

This year’s theme for all projects nationwide is “Triumph and Tragedy in History.” The Goodwins took that theme and focused their project on the Chinese workers that helped build the railroad that joined the east and the west in 1869 in Promontory, Utah. They also discuss the economic impact the railroad had on the country at the time.

The research the sisters came across was astounding as they learned two-thirds of the man power that built the railroad were Chinese workers and that the death toll on that population was devastating. The entire project was also a crash course in how to design a website.

All that hard work paid off when it was announced they won the state competition in their category.

“I was just shocked that we won it,” added Amelia.

The topic of the railroad is something Rachael and Amelia have always had an interest in and they’re looking forward to spending May 10, in Promontory for the big celebration.

Their work on the website didn’t just win the top spot, they were also the recipients for of a specialty award from the Utah State History Department for their project. They are also excited for their upcoming trip to the Nation’s capital.

“I’m excited to see all the different projects from the other states and what students came up with,” added Rachael.

Rachael and Amelia are the daughters of Dustin and Jodi Goodwin of Tremonton.

Three friends, all from Garland and all in 7th grade at ACHIS, joined forces to design their exhibit to better their knowledge, and the world’s, on the tragedy of the holocaust during WWII. Emma Peterson, Chloe Cammack and Kate Black focused their project on the courage and actions of Corrie ten Boom, in the Dutch Resistance for helping Jewish people escape concentration camps in Europe. After the arrest of her family, and time spent in concentration camps for their efforts to save others, she started a center for postwar refugees. The lives of 800 Jews were saved because of them.

It was a tough topic and a hard concept for these three 13 year old girls to grasp but what they learned along the way was good enough for them to win both the regional and statewide contest in their category, junior group exhibit.

“It’s a very, very sad thing,” Chloe said about the topic they chose to do.

“What we wanted to focus on, because it is such a sad topic, was to find people that helped to stop it,” added Kate.

Julia Wilcox, a Language Arts teacher at ACHIS, has been the motivating force behind these students for years, urging them to compete and learn about history at the same time. Along with Angie Woodring, another history-loving teacher at ACHIS, the two helped guide all students that participated this year. This year 11 students from the school submitted a project.

“In the past students had a full class period each day to work and their projects were graded. This year we did it a little differently,” said Julia. “The kids who participated this year came on their own to my classroom each day during WIN time and during many lunches. They also worked for many hours at home. They were not required to do this project. Yes, I invited them and encouraged them but they were never forced to come and they didn’t get a grade on their work. When I say ‘work’ I’m talking about an incredible amount of work. Hundreds of hours of researching, creating a project and completing paperwork for the competition.”

Although Emma, Chloe and Kate made the invite list for the national competition, they need a little help from the community to get there. The cost to fly the girls, and a parent, to the event is more than what they can afford right now. An account has been set up at Box Elder County Credit Union under “National History Special Account” for those wishing to help donate the girls’ traveling costs. The girls will also be selling concessions at year end concerts and performances to help raise money.

If the girls are able to attend the national competition, they all want to visit the Holocaust museum to learn more about what they’ve been researching all these months.

“I’m excited to go to the museums but also just to be at nationals,” said Emma.

Regardless of the outcome at nationals, their teacher is proud of all that they’ve accomplished.

“I am so proud of their efforts. They had fun and have learned so much about the research process. They truly have become young historians,” said Julia.

National History Day is a nonprofit educational organization that promotes the teaching and learning of history in middle and high schools around the world through a variety of programs for teachers and students. The largest program is the National History Day Contest, which was established in 1974.