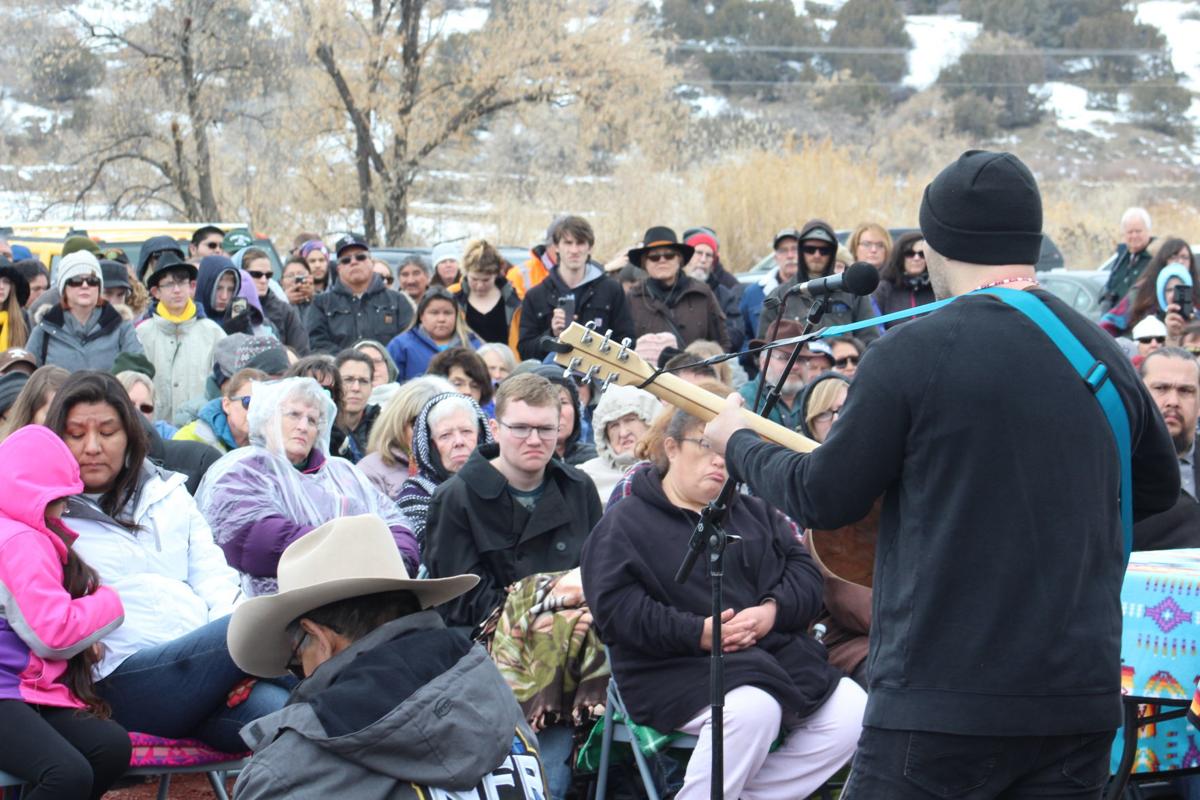 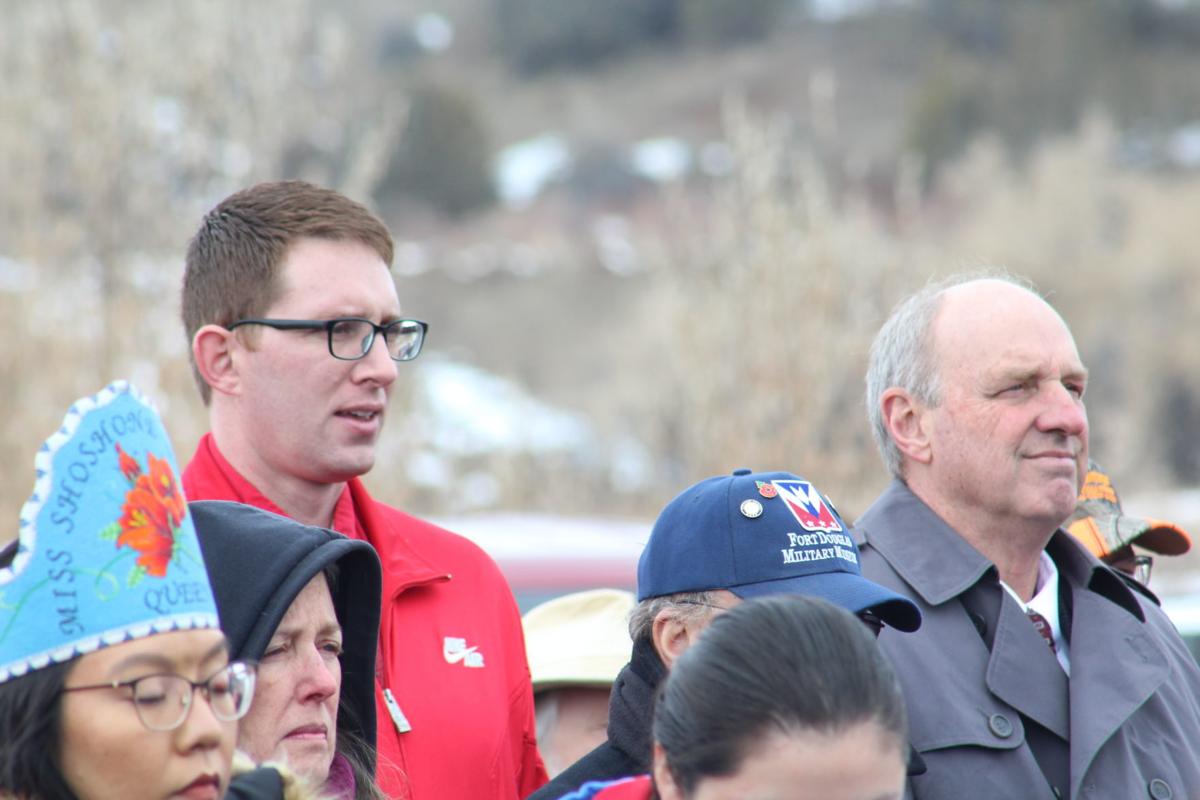 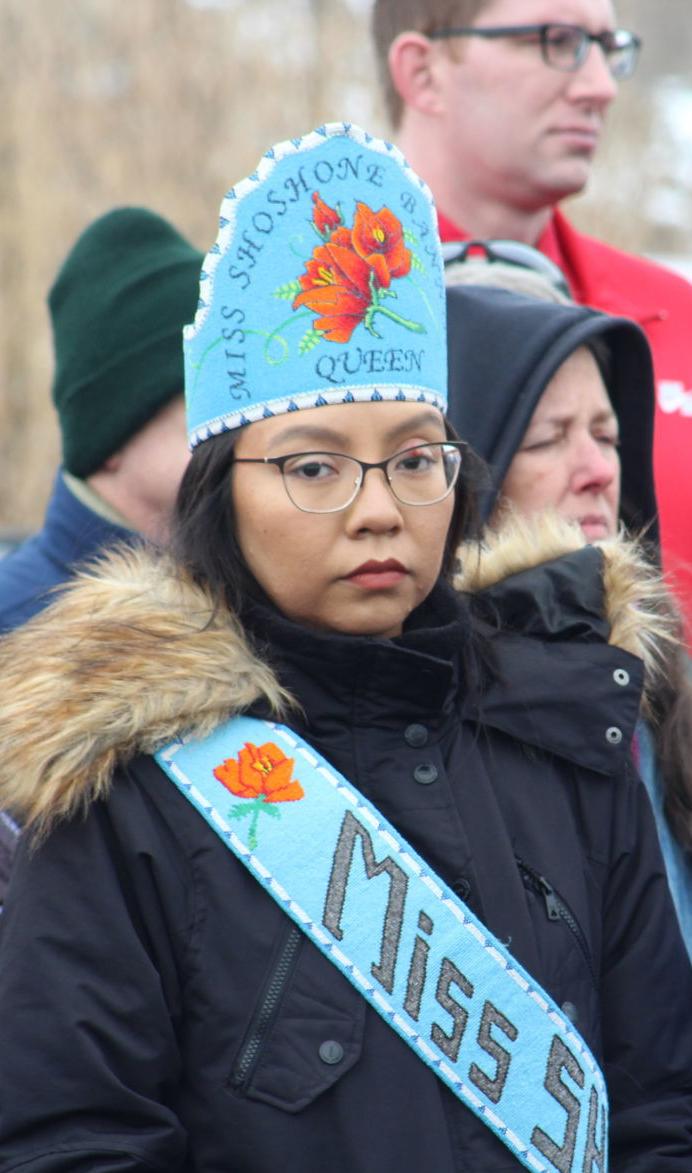 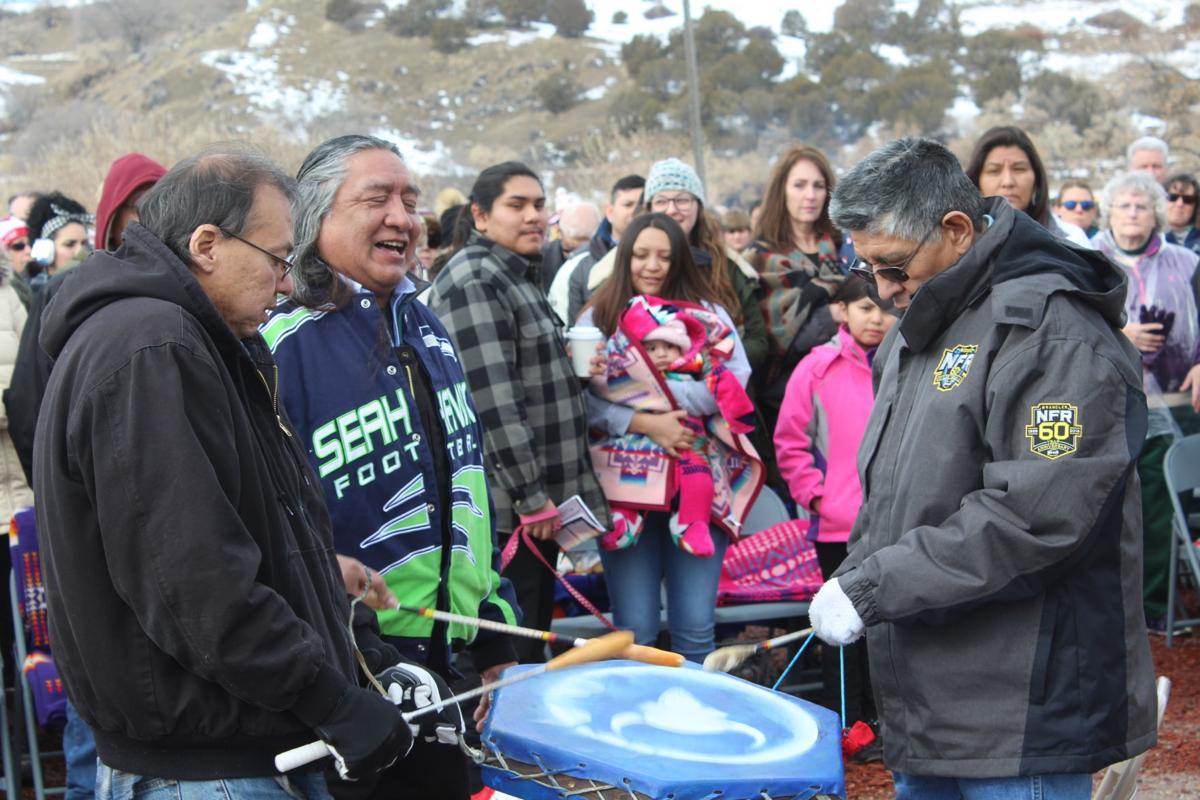 Members of the Shoshone-Bannock Tribes participate in a drum ceremony to start the Bear River Massacre memorial on Wednesday morning. 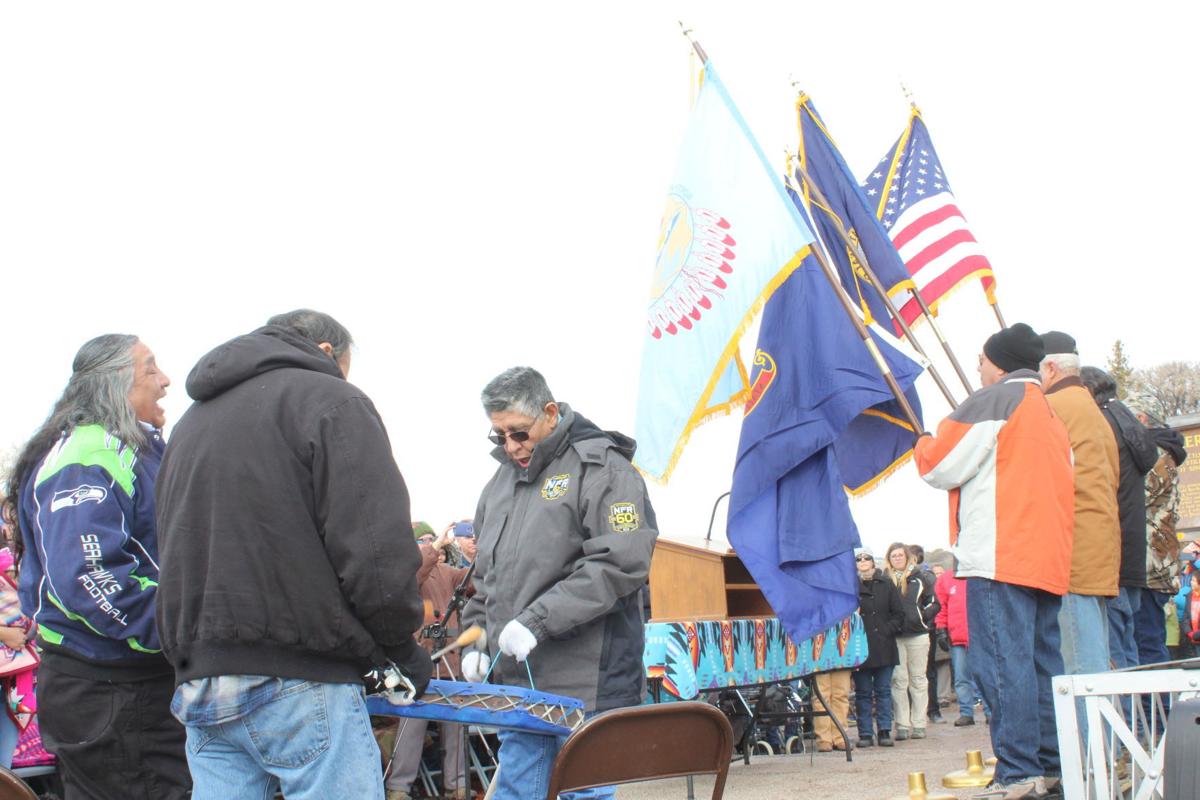 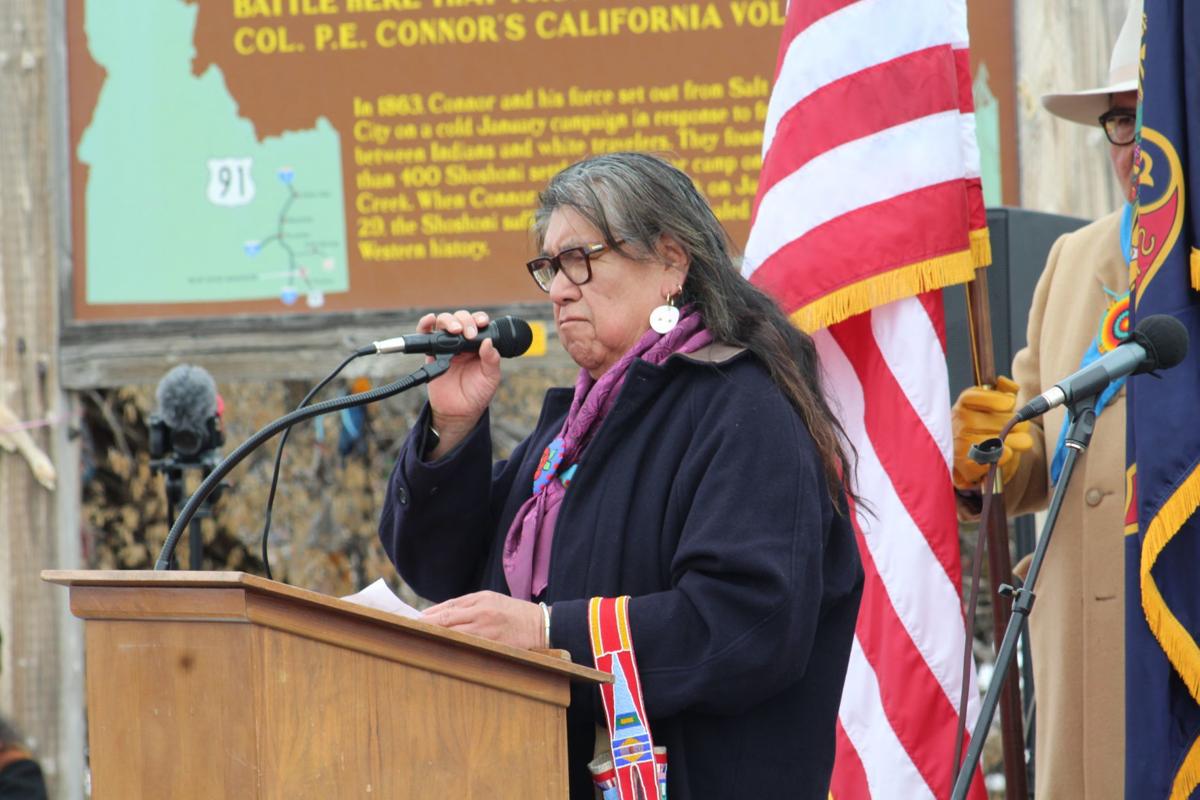 Larry Echo Hawk addressed those who attended the Bear River Massacre Memorial this morning in Preston.

Members of the Shoshone-Bannock Tribes participate in a drum ceremony to start the Bear River Massacre memorial on Wednesday morning.

“It is vitally important … that we create a new history,” said Larry Echo Hawk, guest speaker at the Bear River Massacre Memorial site last Wednesday. “That is why it is so important to remember those sad days of the past, so that we can do better.”

Echo Hawk is a former general authority of The Church of Jesus Christ of Latter-day Saints, who currently works for the Utah Attorney General’s Office as a liaison for Utah’s Native American population. He also served in the Obama administration as the Assistant Secretary of the Interior for Indian Affairs and once worked as the Idaho attorney general. He was the first Native American to hold the position in any state.

Echo Hawk shared with the crowd the Iroquois tradition of the “Seventh Generation.”

“They said in our government, in all the decisions that we make, we must always keep in mind seven generations ahead of us. Our responsibly is to leave behind a world that is better than the one we live in today, better than the world we had in the past,” said Echo Hawk, who felt this was a beautiful way to look at governing.

His comments were echoed by Darren Parry, chairman of the Northwestern Band of the Shoshone Nation. Parry noted that the country seems more divided now than it has ever been, and called for Americans to do better.

“There is a natural order to the universe, of which man is a part. We have been entrusted with the responsibility to take care of this earth, so that she will continue to give and continue to reproduce for generations to come,” he said. “I believe that ancient tribal cultures have important lessons to teach the rest of the world about the inter-connectedness of all living things.”

He continued: “The fact is that our very existence is dependent on the very world that we seem to be destroying. Mother Earth is crying. We need to be better.”

Parry said he cannot, nor does he want to, change history, but he hopes that he and others can change the future for the better.

“Some of the greatest crimes in history were not caused by hatred but by indifference. I believe that it is now time for good people to stand up and make a difference,” he said.

Parry called for compassion in welcoming people escaping repression and poverty as they come to America.

He described American society as “apathy at best, tribalism at worst. We fear others will enter our country and harm us, rather than trust in the abundance of nature and the goodness of the human spirit — principals that our country was founded upon.”

During the memorial, Parry said the Shoshone expect to break ground on a new cultural center in July. It will be located on a bluff on the west side of the Bear River, where it will overlook the entire valley.

Also in attendance at the memorial was Miss ShoBan Stormy Perdash and Janet Gallimore of the Idaho State Historical Society.

Gallimore represented Gov. Brad Little in proclaiming Wednesday a day of remembrance for those who perished 157 years ago when a cavalry detachment led by Col. Patrick Connor raided a Shoshone encampment along the Bear River, killing scores of men, women and children. Casualty estimates have ranged widely from around 150 to more than 490.

Musical tributes were performed by Cache Valley musician Brenn Hill and Micheal Gross, a council member of the Northwest Band of the Shoshone. The memorial closed with a prayer song “for the protection of all us” by Lee Juan Tyler, a chairman of the Shoshone Bannock Tribes, from Fort Hall.

Those who attended the memorial were invited to a chili lunch provided by members of the Northwest Band of the Shoshone.

The number of people who attended the memorial has increased over recent years. Cars were parked along Idaho Highway 91 from the DUP Memorial to the Bear River Bridge south of it. Bused in were children from the fourth and fifth grades of Georgetown Elementary in Bear Lake County, escorted by their teachers, Christina Reese and Danielle Smith. Reese first learned about the significance of the site when she was in college and interviewed Parry for a class assignment.

“I just felt it was important the kids know,“ she said.