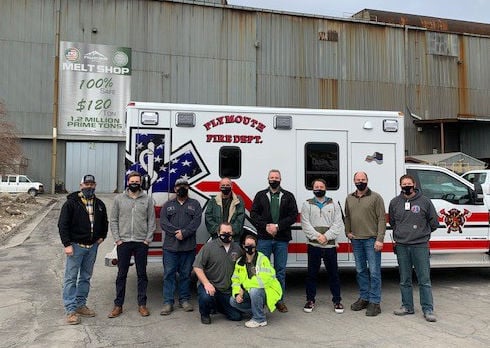 Emergency services in two rural northern Box Elder County communities recently received a big boost when both received brand-new ambulances that will expand their lifesaving capabilities and make things easier on the volunteers who sacrifice their time and effort to help those in the most dire of needs.

The Plymouth Fire Department recently had its new ambulance delivered to the town. The $200,000 bill for the state-of-the-art outfit was purchased through a donation drive headed up by Nucor Steel.

The effort to gather donations for the much-needed upgrade was started by Plymouth Assistant Fire Chief Nick Marshall, who works as an electrician at Nucor’s Plymouth plant.

Marshall said the ambulance the department has been using was 16 years old and starting to have some mechanical problems, so he went to his employer to see what they might be able to do.

“I talked with them, they discussed it and went to some of the other contractors and businesses around and got them to donate as well,” he said.

Other donors included Western Metals Recycling, which sits next door to the Nucor plant and works closely with it, as well as Cache Valley Electric, Associated Brigham Contractors and Vicars Trucking.

Along with four-wheel drive capability, the new ambulance built by Wheeled Coach Industries on a Ford F450 frame is outfitted with a Stryker Power-LOAD unit that hooks into the gurney when a patient is wheeled to the back, lifts the cot and patient and slides it into the cabin.

Also getting a new rig was the remote western Box Elder community of Grouse Creek, which now has an ambulance with four-wheel drive capability for the first time ever.

Grouse Creek’s new outfit, made by Osage Ambulances in Linn, Missouri and built on a Dodge Ram frame, also carried a price tag of about $200,000. That unit was paid for by Box Elder County using funds the county receives for wildland firefighting efforts.

Box Elder County Fire Chief Corey Barton said that when he took over as head of emergency services for Grouse Creek seven or eight years ago, the community didn’t have an ambulance at all. He was able to secure one, but neither Grouse Creek nor Park Valley had one with four-wheel drive in a remote mountainous area where such capability is often a necessity.

Park Valley finally got a four-wheel drive a few years ago, so when Grouse Creek would receive a response call for places like Yost on the other side of the mountains, it would have to call on Park Valley to respond because the Grouse Creek ambulance couldn’t make it over the pass.

“It’s gonna be quite an improvement in that area,” Barton said. “This will last for a lot of years out there.”

Plymouth responds to calls throughout the Malad River Valley from the Idaho border all the way south to I-15 mile marker 388 west of Fielding, and Marshall said his department has seen a steady increase in calls as more people move into the area.

Grouse Creek is located in one of the most remote regions of the Continental United States, and its small fire department covers a large swath of land from Highway 30 on the south end to the Idaho border, including the communities of Lynn and Yost.

Most of the emergency work in that area deals with wildfires, so the ambulance will often be found standing by on the scene of a fire in case firefighters need it.

The gurney on the Grouse Creek ambulance is fully electric, so much like the Plymouth ambulance, will spare EMS personnel from having to lift patients into the cabin manually.

Both Barton and Marshall agreed that having electric lift assistance is one of the most important upgrades they could ask for. Many first responders have ended up with chronic back problems from repeatedly having to lift patients into ambulance cabins, and having these technologies will spare them that repetitive strain.

“Before it would take several of us,” Marshall said. “This will make a huge difference.”