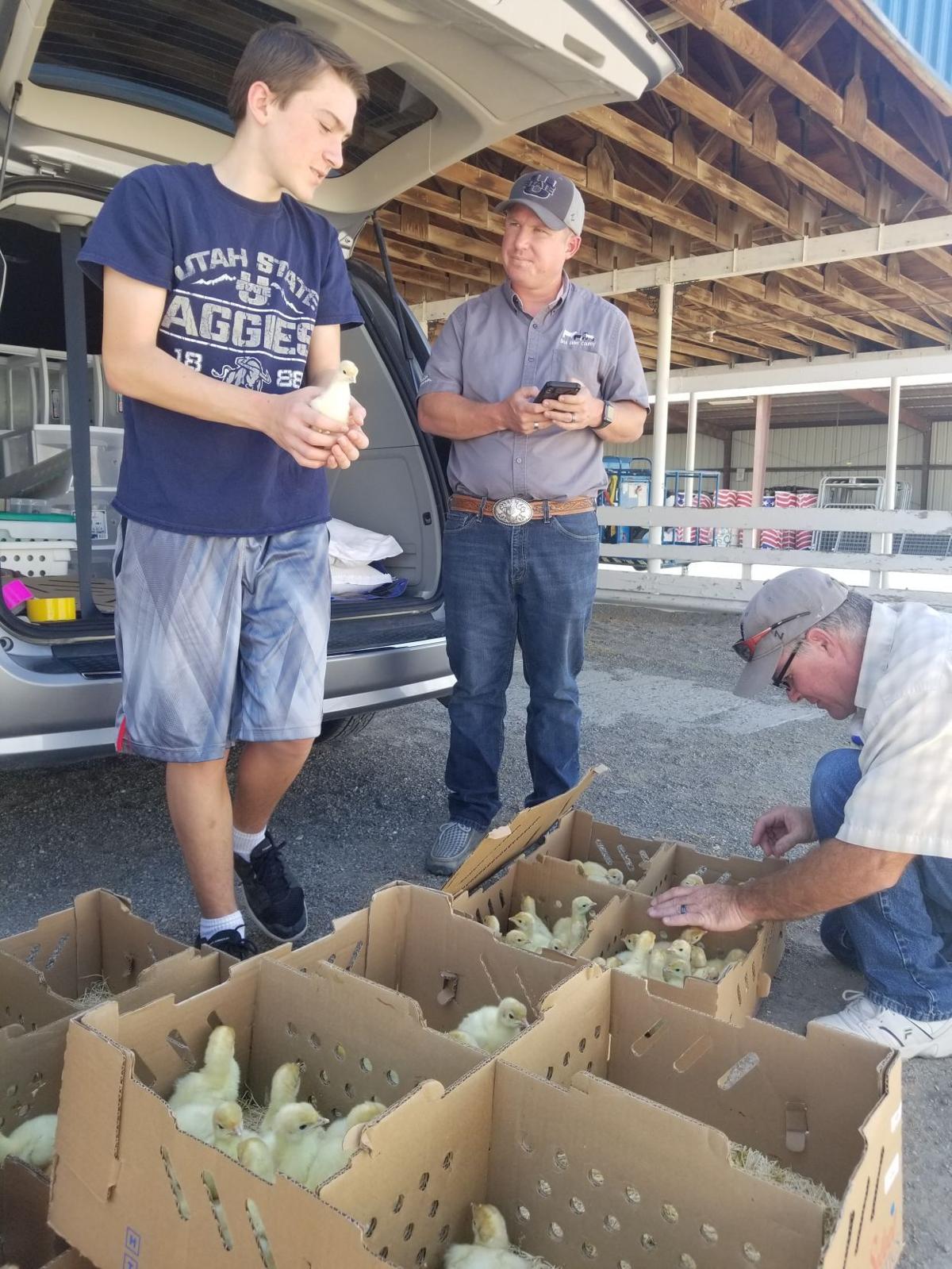 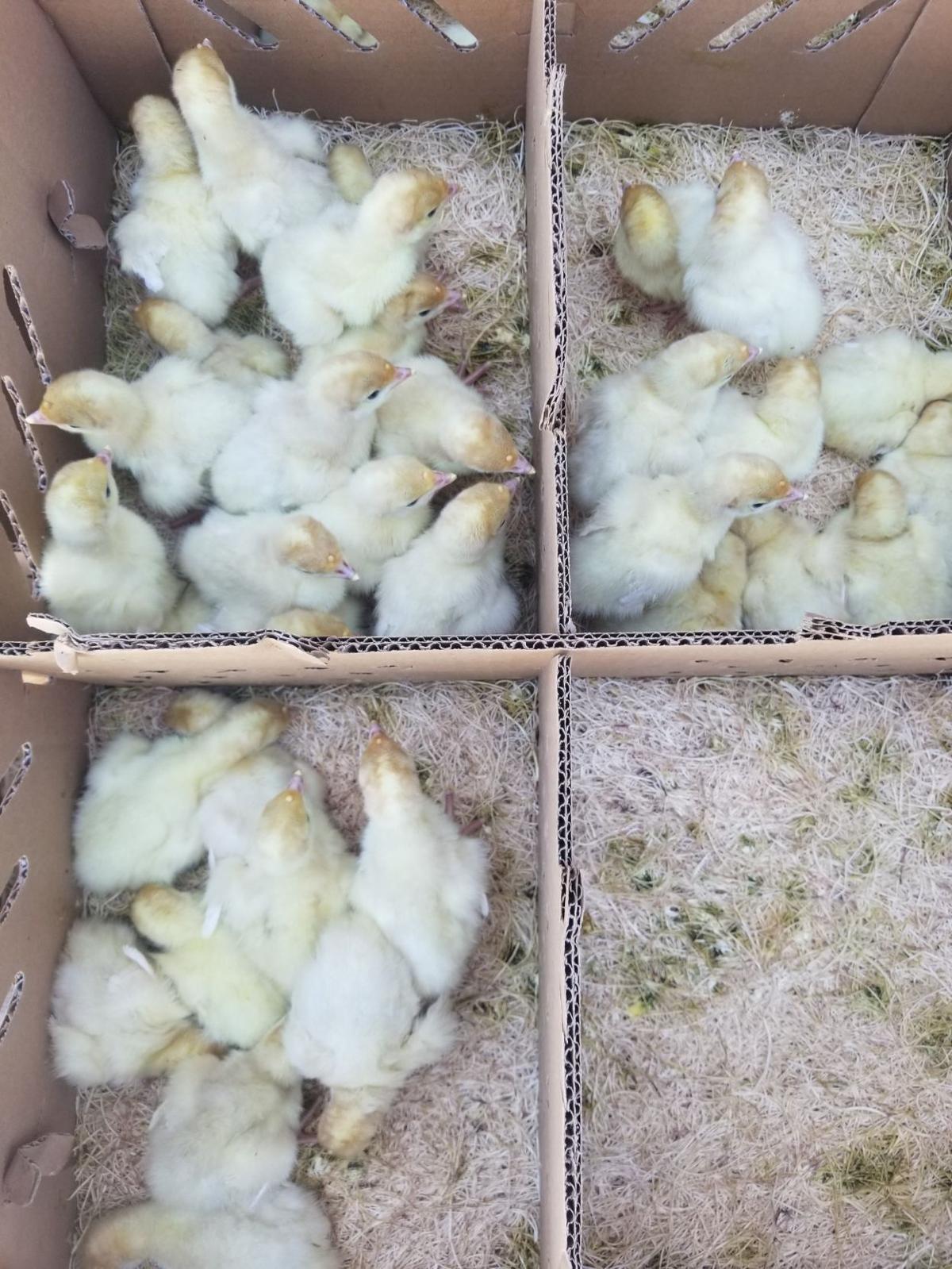 Turkey poults wait to be picked up at the Box Elder County Fairgrounds Friday, July 31. The poults came from a hatchery in California and will be raised by local 4-H and FFA members. 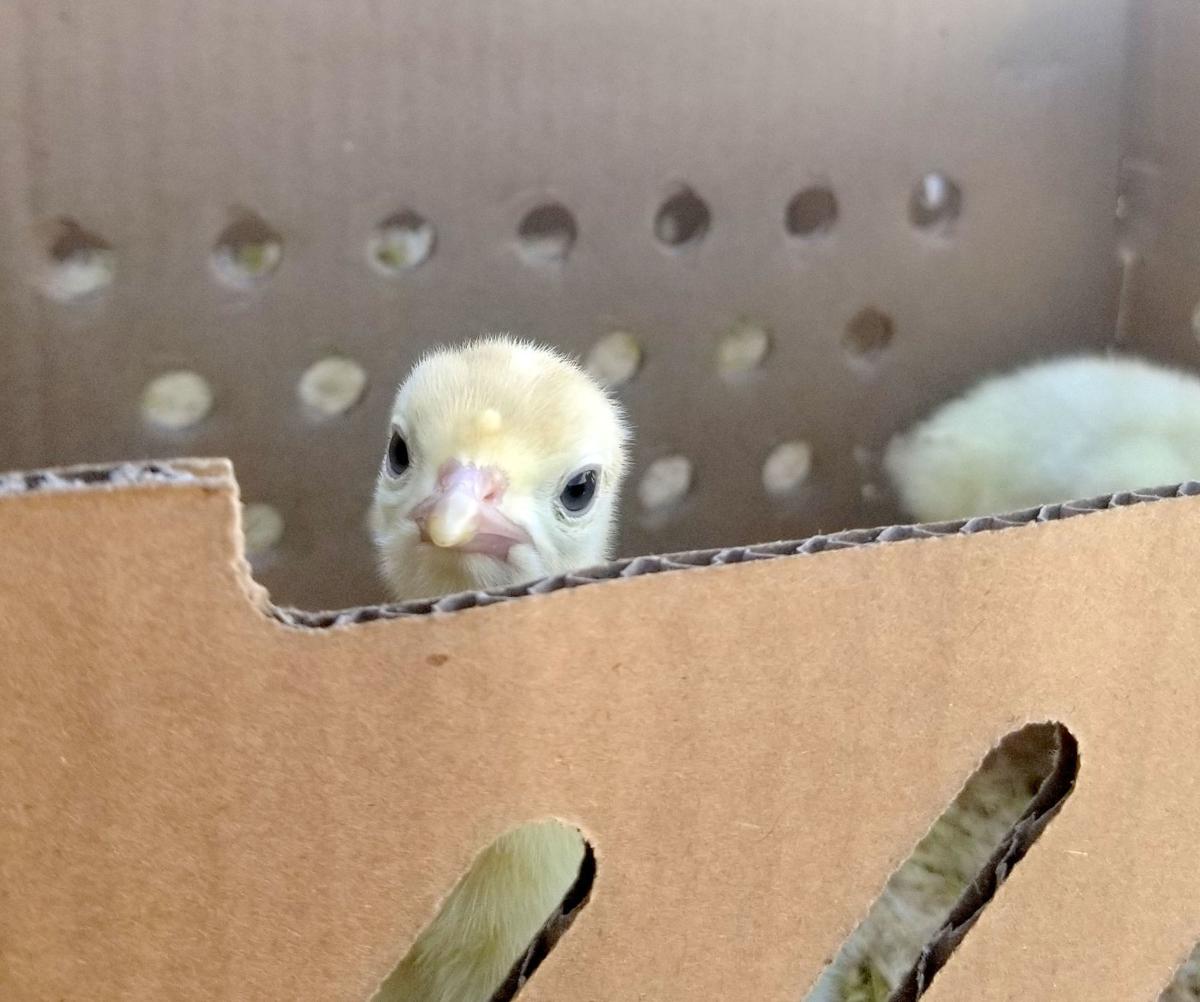 A turkey poult peeks over the edge of a box at the Box Elder County Fairgrounds Friday, July 31. The poult was hatched in California about 24 hours earlier and shipped to Utah along with approximately 3,000 others.

Turkey poults wait to be picked up at the Box Elder County Fairgrounds Friday, July 31. The poults came from a hatchery in California and will be raised by local 4-H and FFA members.

A turkey poult peeks over the edge of a box at the Box Elder County Fairgrounds Friday, July 31. The poult was hatched in California about 24 hours earlier and shipped to Utah along with approximately 3,000 others.

Thanksgiving is still almost four months away, but preparations for the holiday are already under way in Box Elder County after a special delivery that came last week.

Local 4-H and FFA participants stopped by the Box Elder County Fairgrounds in Tremonton last Friday to pick up turkeys that they will raise and hopefully sell for top dollar at auction in November.

Mike Pace, Box Elder County director for Utah State University Extension, along with County Extension Agent Josh Dallin and Pace’s son Ryan, made a run Friday to pick up some 350 newly hatched turkeys. They drove to Moroni, a small town located almost literally in the geographic center of Utah that is home to one of the largest turkey processing facilities in the Intermountain West.

The young poults, as they are called, had been on a whirlwind journey in just the first 24 hours of their lives. Approximately 3,000 poults that were hatched at a facility in California the day before were shipped to Moroni, where they were divvied up between 4-H and FFA officials from all over the state.

At the fairgrounds on Friday, the fuzzy, yellow hatchlings chirped and milled about inside several cardboard boxes while they waited to be taken to their new, temporary homes. Over the next few months, more than 40 local youth will raise them, using the knowledge and skills they have learned in 4-H and FFA to try to grow the biggest birds that will fetch the highest prices come auction time.

Many of the birds that went to other parts of Utah will also end up in Box Elder County, which hosts both a county and statewide auction in November. Bidders will come from miles around to buy the birds, some of which could grow to as much as 40 pounds by the time they reach the end of their lives at a processing facility in Bothwell.

Pace and Dallin, working with local FFA Advisor TJ Rhodes, serve as the statewide leaders of the youth turkey program.

“We’re just really thrilled to be able to do something like this,” Dallin said. “Especially in a year like this to see everybody get excited and have some sort of a normal thing happen and give the kids something to look forward to, it’s really a special thing.”

Pace said the program offers a level playing field because all the turkeys came from the same hatchery and gene pool, and all were born at the same time.

“They’re all day-old birds, so it pretty much comes down to management the way the kids take care of them, feed them, water them, love them,” he said.

The fairgrounds for many years have played host to the statewide turkey auction, which will be held on Nov. 14 this year. Dallin said judges for the event will look at anywhere from 300 to 400 dressed (processed) turkeys, selecting a grand champion and other placements based on overall quality.

“It’s really neat to have a judge come in and work through all those birds,” he said.

The county auction has always been a silent auction and dinner event until two years ago, when organizers decided to make it a live auction based on feedback from local businesses and other community members.

The first live Box Elder County auction in 2018 brought in more than $6,000 from the sale of 22 turkeys. The event has already grown to the point that it has to be moved to a larger building this time around, with more than 40 processed and packaged birds making the final cut for the auction.

“A lot of buyers would come to the state show, and said they really wanted something to help the Box Elder kids out,” Dallin said. “We’ve had a tremendous amount of support for both our state and county auctions.”

The county auction is scheduled for Tuesday, Nov. 24, just two days before Thanksgiving. The turkeys are harvested the day before and cooled down overnight to be processed just in time for the show.

“Because we have the unique opportunity to have our processing plant here, these birds are as fresh as you can possibly get them,” Dallin said. “They literally can go right into the fridge after they are purchased here at the auction, and cooked for Thanksgiving dinner.”

For birds that aren’t entered into the auctions, the youth who raise them typically either have their own buyers lined up, or their families will eat the turkeys themselves.

At the end of the day Friday, Dallin and Pace found themselves with dozens of extra birds. Dallin said it’s good to have a few extras on hand, at least early on in the process of raising them.

As for the remaining birds, Dallin and Pace often end up keeping some at their own homes until they can be sent to other parts of the state where sometimes the count comes up short.

“Right now it’s really important that they get into a brooder,” Dallin said. “We’ll get them food and water and that heat that’s necessary for them. Generally, some people around the state will say they think they were shorted a couple, and we’ll work to get them transported there.”

He said the best part of the program is the valuable experience the youth receive in raising animals.

“This is a project almost anybody can do,” he said. “A city kid can put a couple of turkeys in the backyard and it’s really a neat thing.”

Pace said it’s a good project for youth because it doesn’t require a long-term commitment. The turkeys are ready to be harvested after just a few months.

The auctions are also a great way for local communities to bond and support each other in a longstanding tradition, Dallin said.

“We have many people to thanks over the years who have made this possible,” he said. “There have been many people in charge – people who started it who have now passed on.”