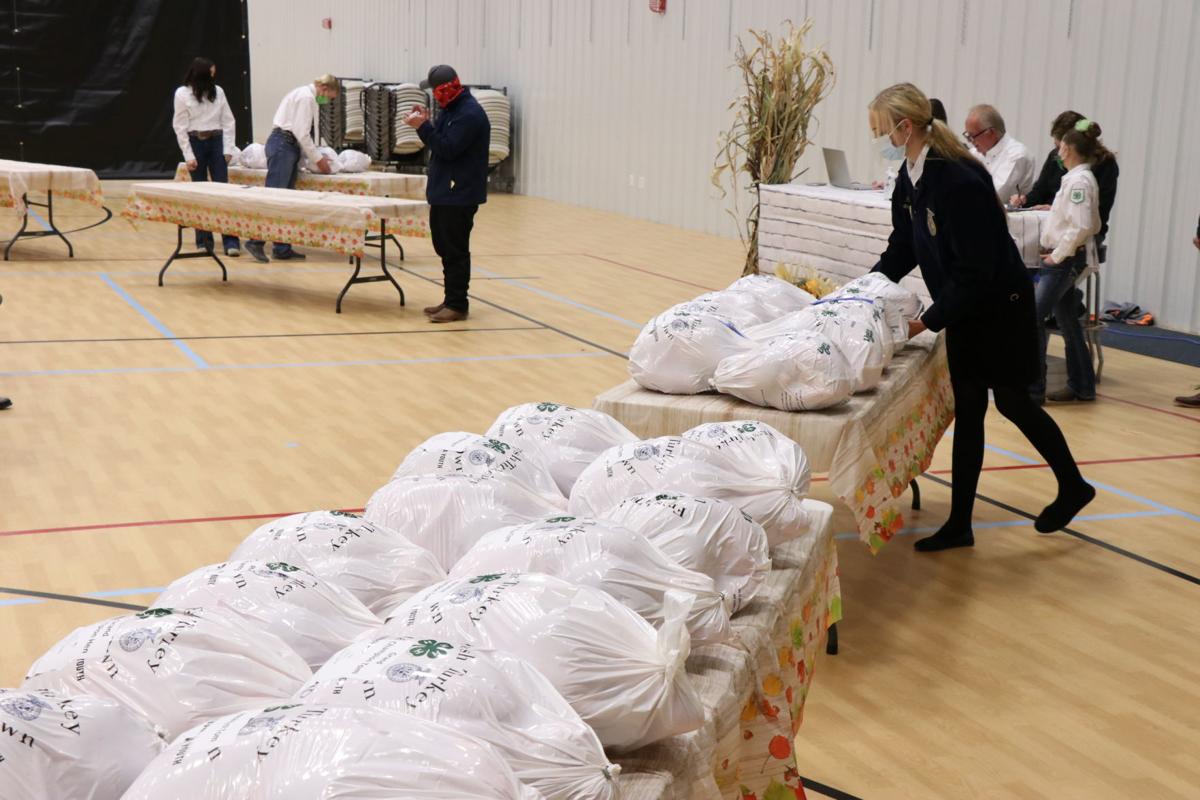 A participant places the turkey she raised on a table after it was sold during the Box Elder County Turkey Auction Tuesday, Nov. 24. See more photos from the event online at www.tremontonleader.com 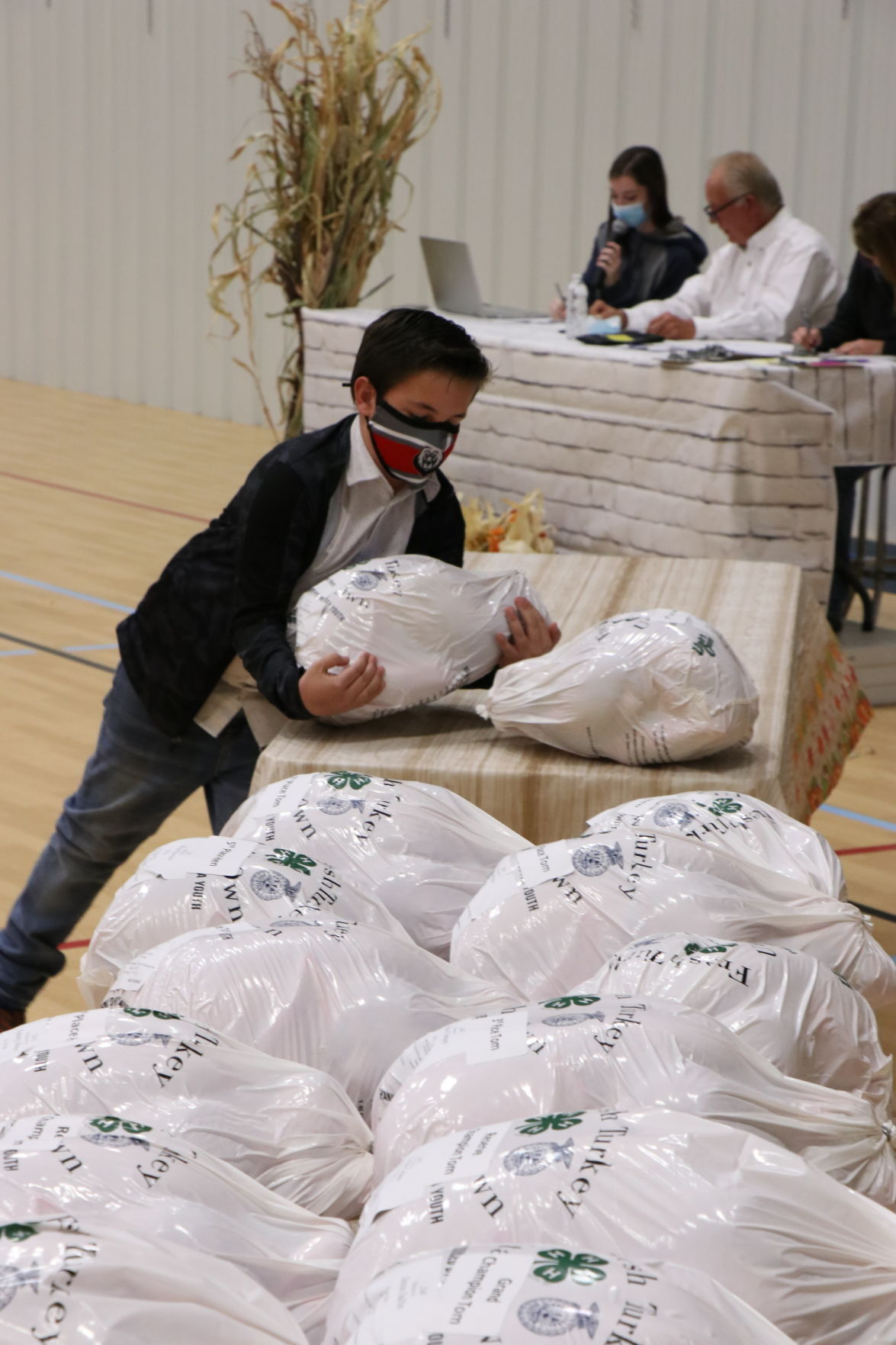 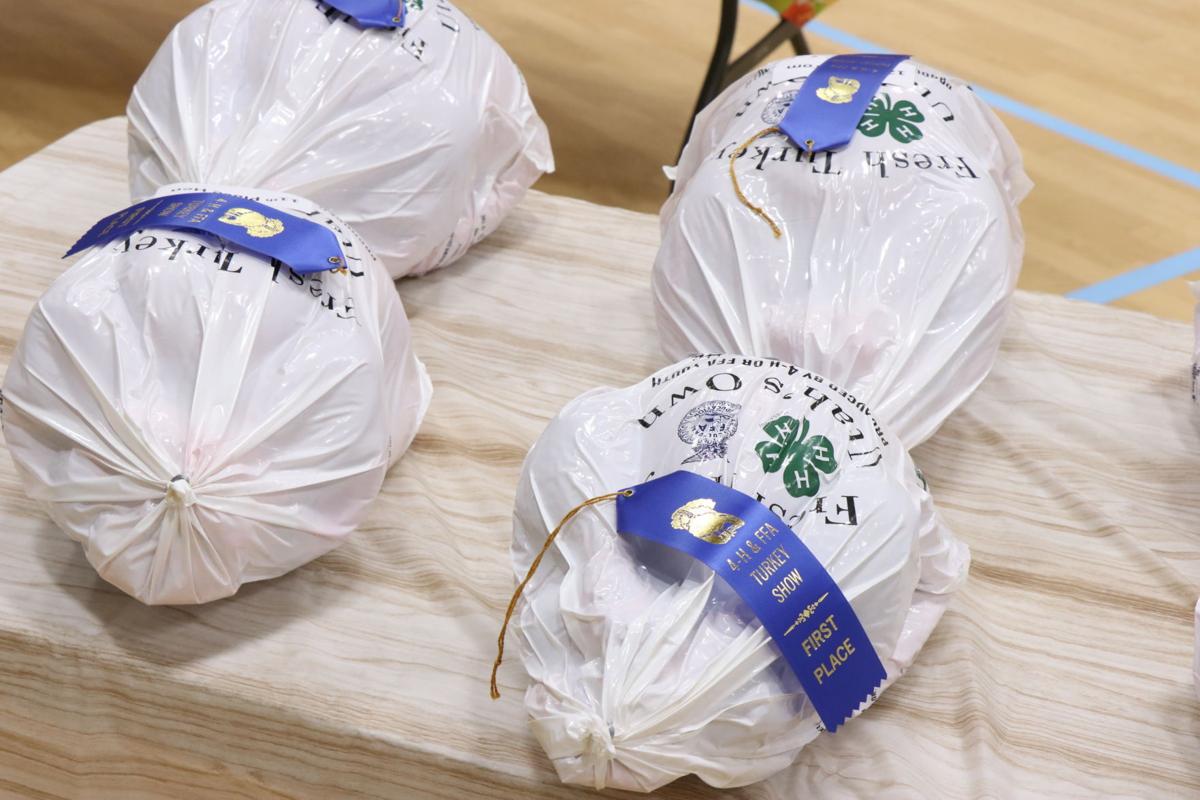 Processed turkeys wait to be auctioned just in time for Thanksgiving Tuesday, Nov. 24 at the Box Elder County Fairgrounds. 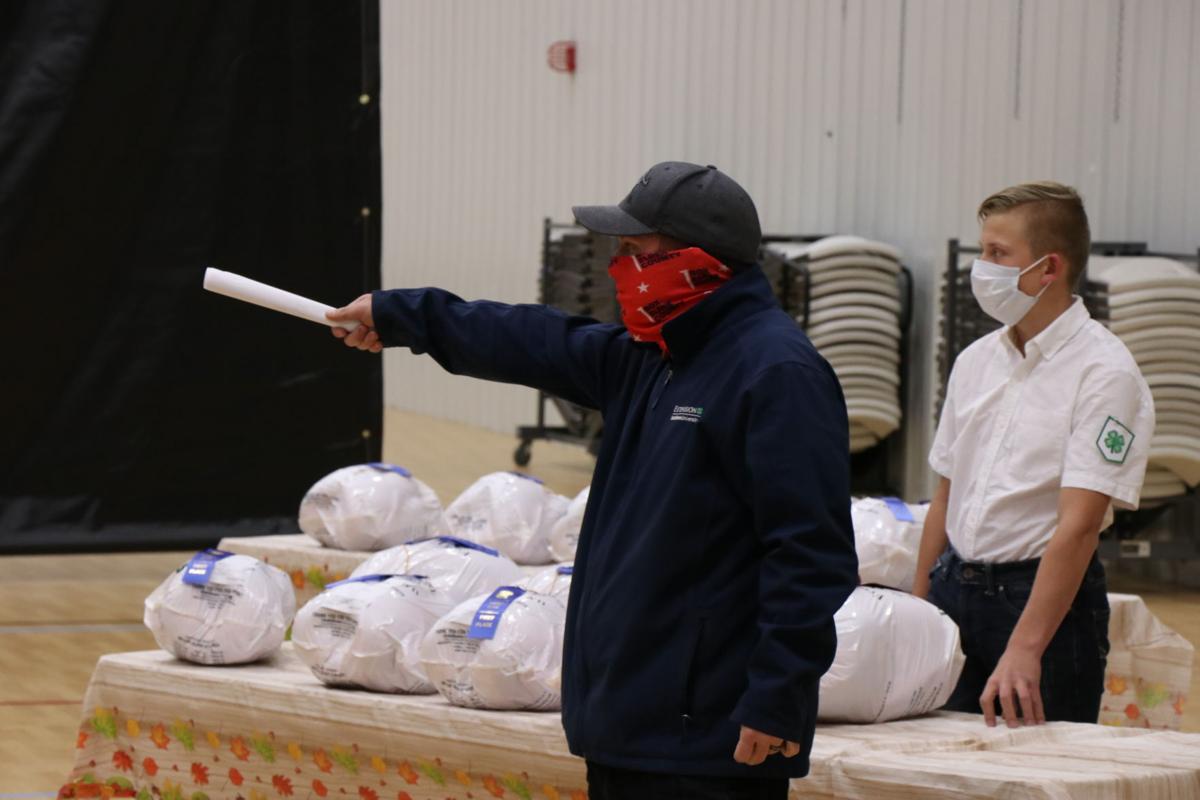 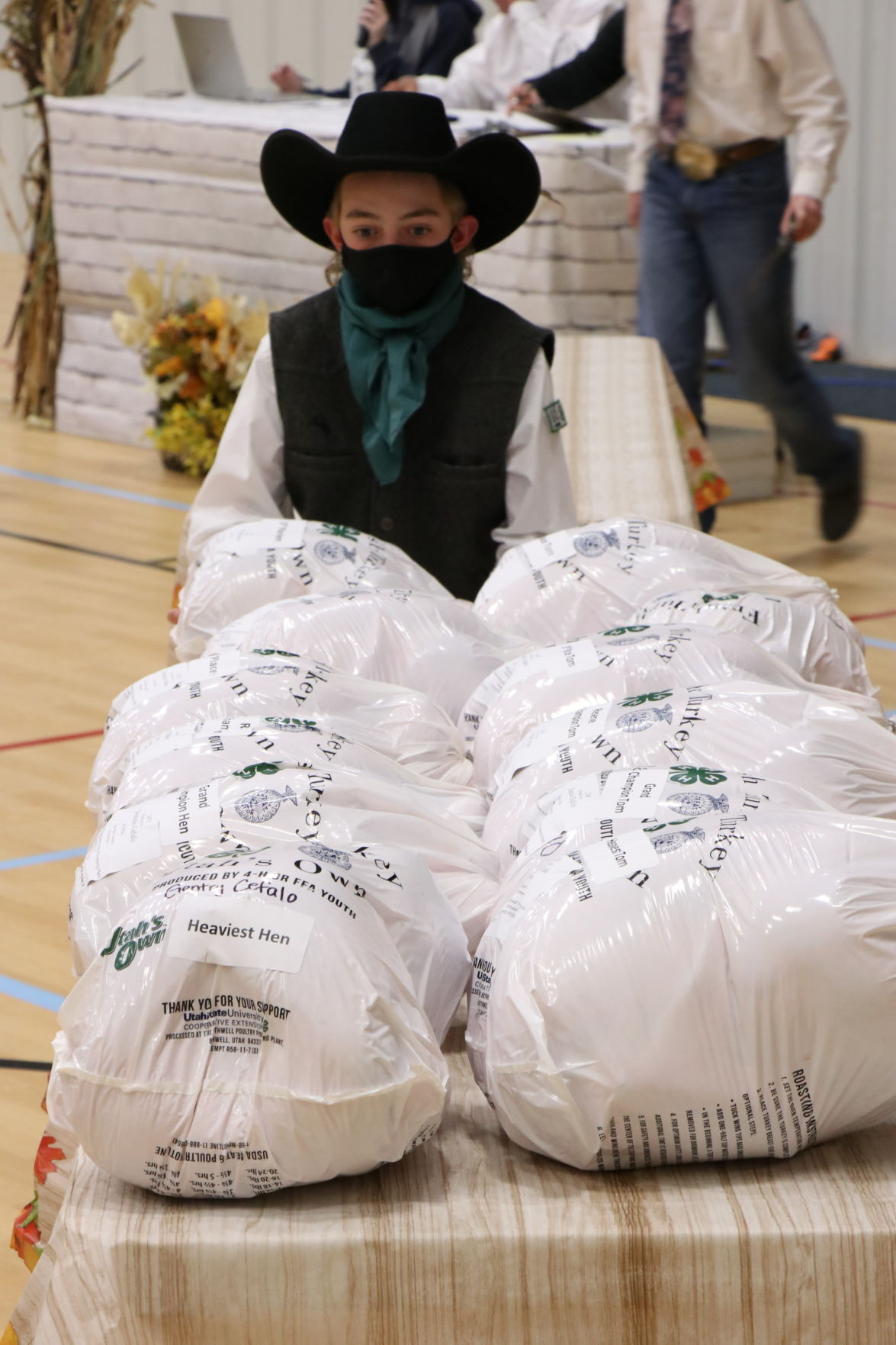 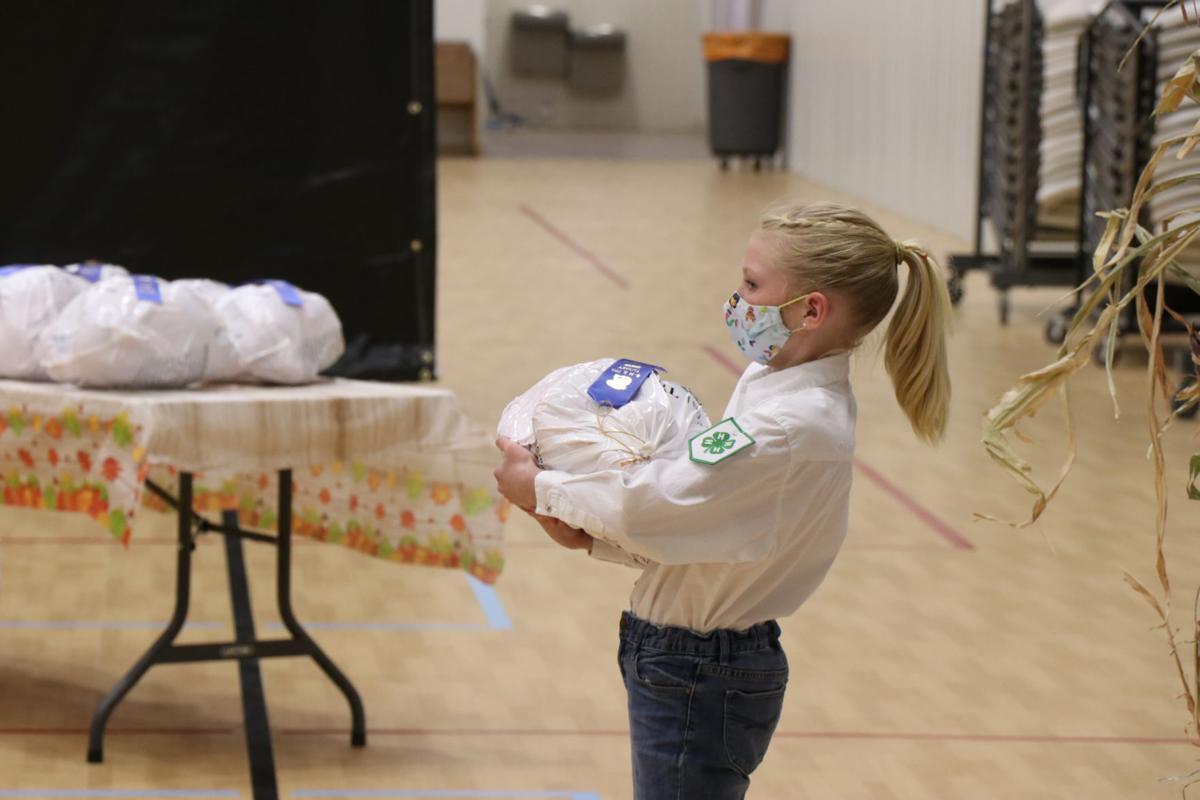 A participant holds the turkey she raised while it is sold during the Box Elder County Turkey Auction Tuesday, Nov. 24. 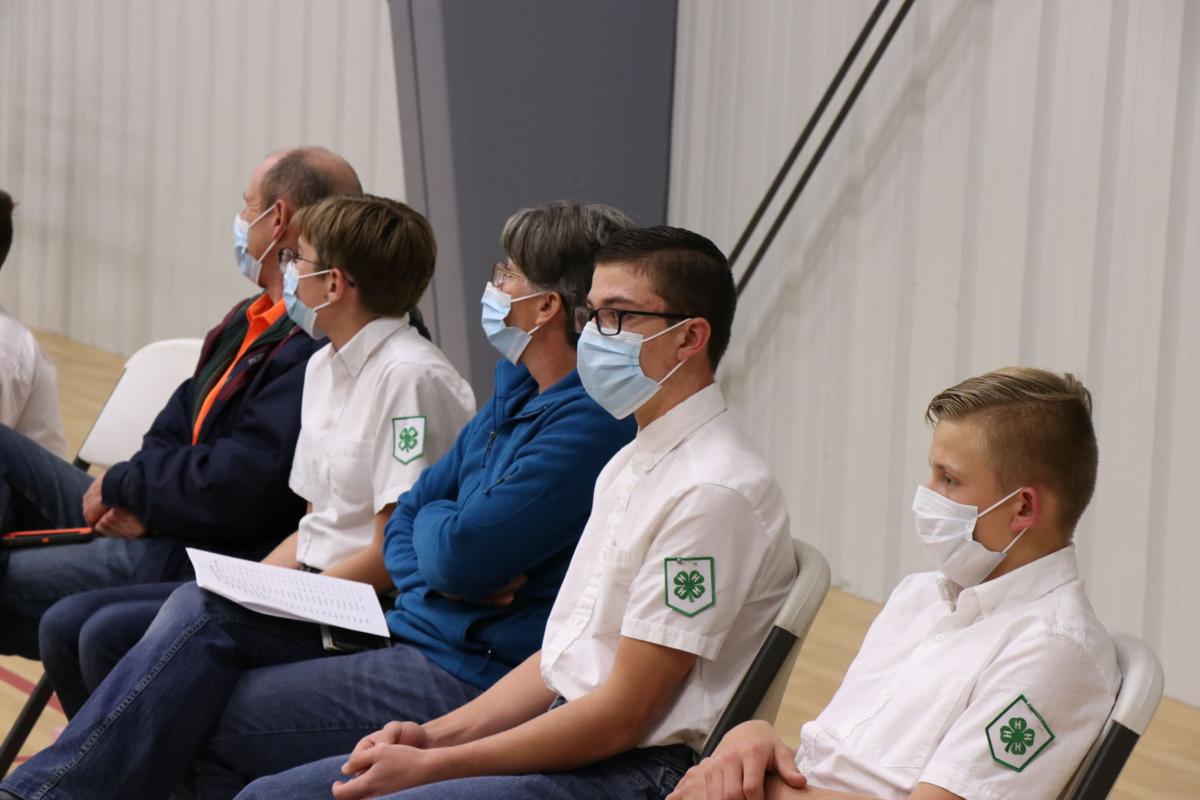 Participants wait for their names to be called during the Box Elder County Turkey Auction Tuesday, Nov. 24 at the county fairgrounds.

A participant places the turkey she raised on a table after it was sold during the Box Elder County Turkey Auction Tuesday, Nov. 24. See more photos from the event online at www.tremontonleader.com

Processed turkeys wait to be auctioned just in time for Thanksgiving Tuesday, Nov. 24 at the Box Elder County Fairgrounds.

A participant holds the turkey she raised while it is sold during the Box Elder County Turkey Auction Tuesday, Nov. 24.

Participants wait for their names to be called during the Box Elder County Turkey Auction Tuesday, Nov. 24 at the county fairgrounds.

A process that started back in the middle of summer came to fruition last week, as dozens of local youth brought the turkeys they have been raising for the last four months to the auction block.

Local families and businesses turned out on Tuesday, Nov. 24, wearing masks and socially distancing in tight-knit groups, to bid on turkeys raised by local 4-H and FFA participants just in time to put the birds on Thanksgiving tables. The event raised thousands of dollars to support the 4-H and FFA organizations, as well as the auction itself.

The Box Elder County Turkey Auction is a longstanding annual tradition in Tremonton, but the format was changed from a silent auction to a live auction beginning in 2018. That presented some challenges this year due to COVID-19 restrictions, but organizers were determined to recognize and reward the efforts of local youth in person.

“We’re just really thrilled to be able to do something like this,” Dallin said. “Especially in a year like this to see everybody get excited and have some sort of a normal thing happen and give the kids something to look forward to, it’s really a special thing.”

“Can’t thank the incredible community and buyers enough for coming out to support the kids,” Dallin said.

Preparations for the auction began in early August, when Pace and Dallin, drove to Moroni in central Utah to pick up some 350 newly hatched turkeys for the 4-H program.

The poults (turkey-speak for chicks) had been on a whirlwind journey in just the first 24 hours of their lives. Approximately 3,000 poults that were hatched at a facility in California the day before were shipped to Moroni, where they were divvied up between 4-H and FFA officials from all over the state. Participants came to the Box Elder County Fairgrounds to pick up their poults and raise them for last week’s auction.

After the birds were raised throughout late summer and into the fall season, they were taken to a processing plant in Bothwell, prepared and packaged for auction, and sold inside the home arts building at the fairgrounds, just steps from where they were distributed nearly four months earlier.

The fairgrounds is also home to the annual state turkey auction, which was held earlier in November. The state auction is a much larger event in terms of the number of turkeys sold and total dollars changing hands, but the local auction holds a special place in the hearts of all involved.

Pace said the program offers a level playing field because all the turkeys came from the same hatchery and gene pool, and all were born at the same time.

“They’re all day-old birds, so it pretty much comes down to management the way the kids take care of them, feed them, water them, love them,” he said.

The county auction has always been a silent auction and dinner event until two years ago, when organizers decided to make it a live auction based on feedback from local businesses and other community members.

The first live Box Elder County auction in 2018 brought in more than $6,000 from the sale of 22 turkeys. The event has already grown to the point that it had to be moved to a larger building this time around, with more than 40 processed and packaged birds making the final cut for the auction.

“A lot of buyers would come to the state show, and said they really wanted something to help the Box Elder kids out,” Dallin said. “We’ve had a tremendous amount of support for both our state and county auctions.”

The county auction was held just two days before Thanksgiving, with the turkeys harvested the day before and cooled down overnight to be processed just in time for the show.

“Because we have the unique opportunity to have our processing plant here, these birds are as fresh as you can possibly get them,” Dallin said. “They literally can go right into the fridge after they are purchased here at the auction, and cooked for Thanksgiving dinner.”

For birds that aren’t entered into the auctions, the youth who raise them typically either have their own buyers lined up, or their families will eat the turkeys themselves.

He said the best part of the program is the valuable experience the youth receive in raising animals.

“This is a project almost anybody can do,” he said. “A city kid can put a couple of turkeys in the backyard and it’s really a neat thing.”

Pace said it’s a good project for youth because it doesn’t require a long-term commitment. The turkeys are ready to be harvested after just a few months.

The auctions are also a great way for local communities to bond and support each other in a longstanding tradition, Dallin said.

“We have many people to thanks over the years who have made this possible,” he said. “There have been many people in charge – people who started it who have now passed on.”