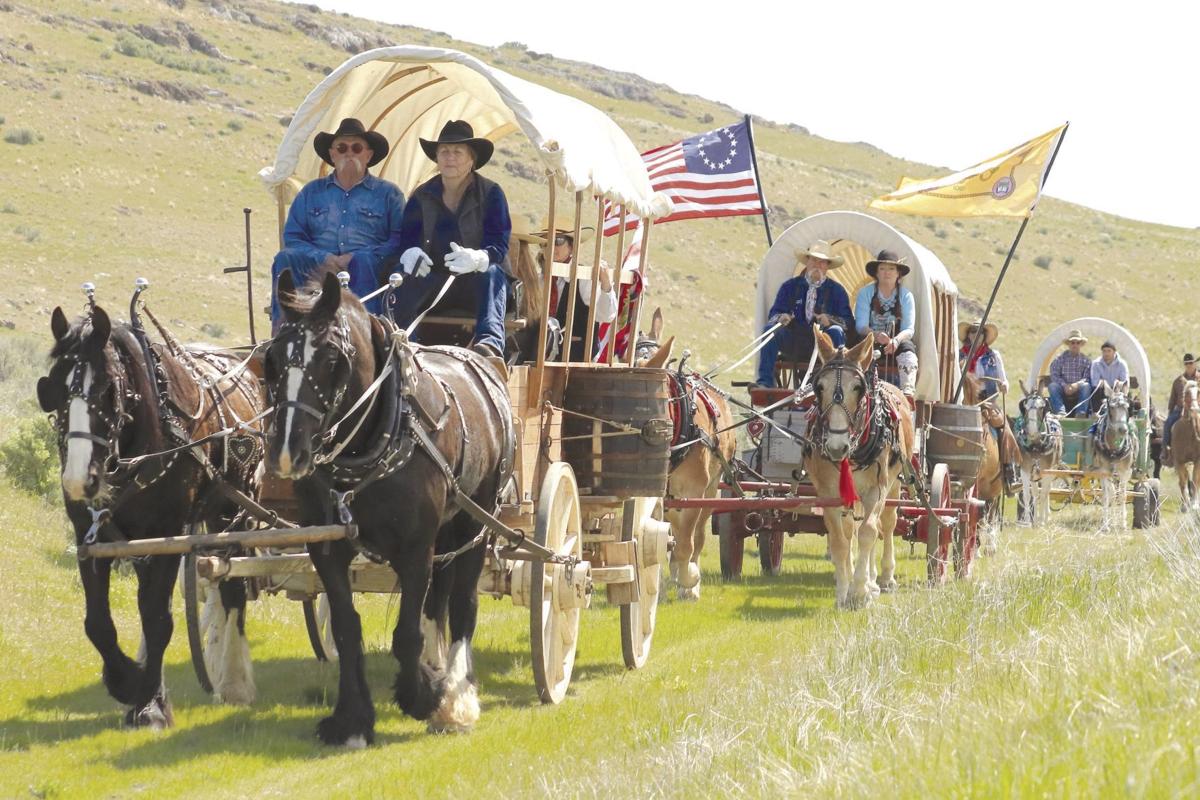 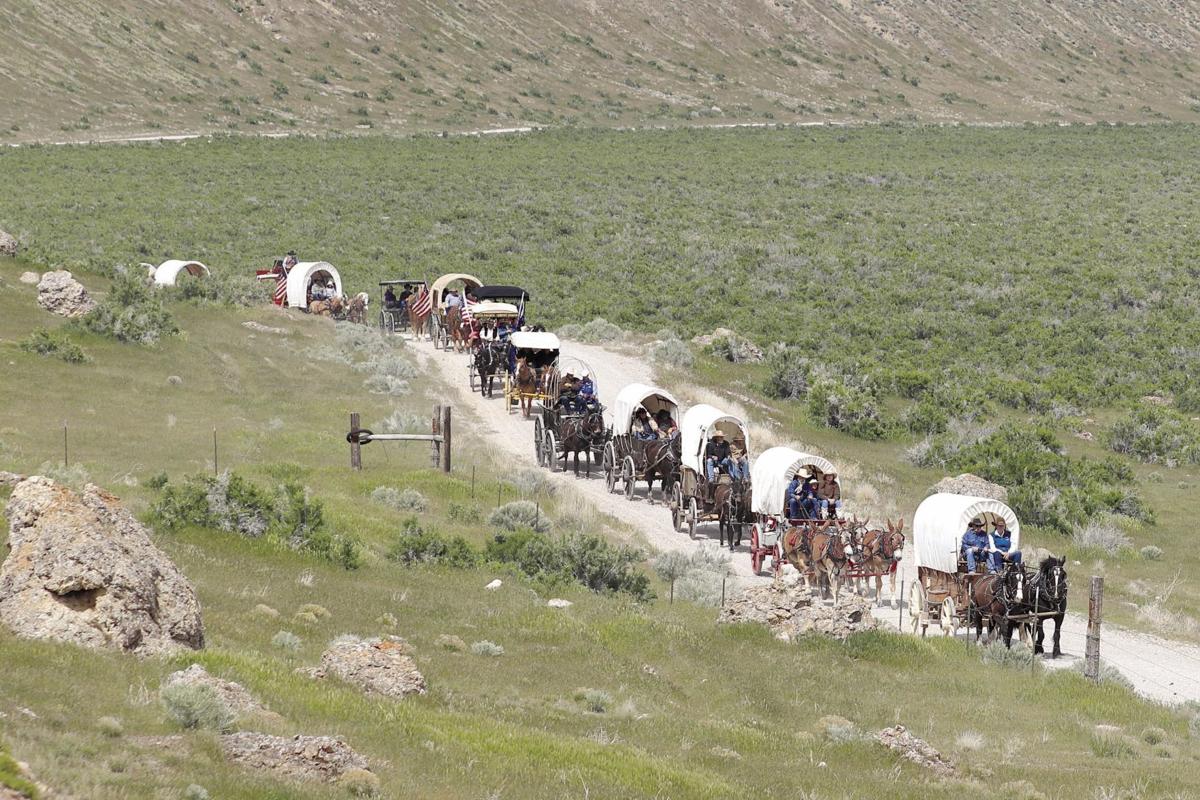 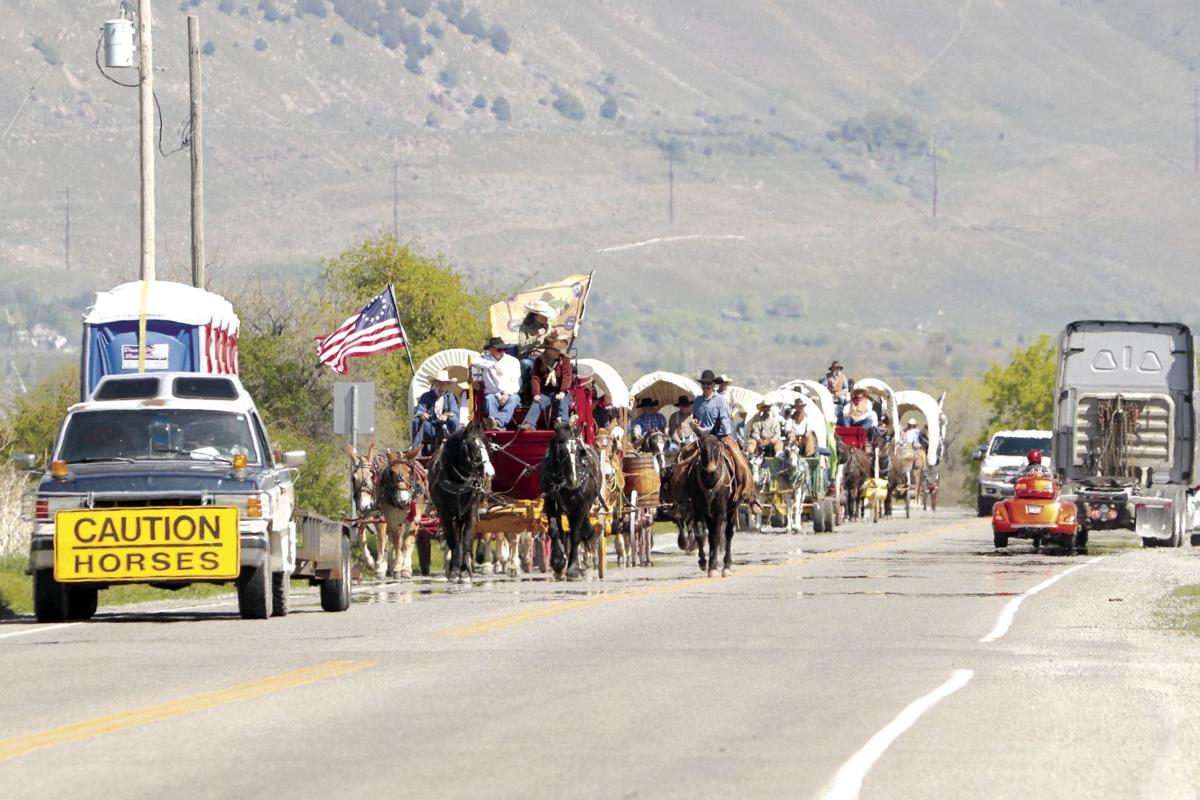 Leon Gubler’s wife was born on May 10, 1969, the day marking the centennial of the driving of the Golden Spike at Promontory, so he wanted to do something special with her on the 150th anniversary of the event.

The Gublers, from La Verkin in Southern Utah, have long been enthusiasts of the old wagons and stagecoaches that were the primary means of transportation for pioneers in the west before the railroad came along. They got in touch with their friend Brian Arnold, and came up with a plan to create their own wagon train trek across Box Elder County to commemorate the Golden Spike sesquicentennial.

“We got talking about a wagon train, and it just snowballed from there,” Gubler said. “As soon as we mentioned that, it was kind of an ‘oh yeah’ moment.”

Arnold and others got to work arranging the necessary permits, drops of water and other supplies, and the various other logistical preparations that were needed to make such a trip happen.

The week before the event, the Gublers, Arnolds and dozens of others started their journey at the all-horse parade in downtown Brigham City. From there, they set out west toward Corinne, then out to Promontory past Golden Spike National Historic Park, continuing westward to Locomotive Springs before heading north toward the old railroad town of Kelton. The idea was to follow the old, original railroad route as closely as possible, using established roads located primarily on private property, for which they got advance permission from landowners.

Teamsters, horseback riders and passengers from Utah, California (the state that donated the original Golden Spike), Nevada (the state that donated the original Silver Spike), Texas, Arkansas, New York, Idaho, Colorado, Oklahoma and Alberta, Canada plan to participate. Twenty-one wagons and approximately 50 horseback riders took part in the journey, using a combination of replica wagons and originals dating to the late 1800s. Two of the wagons came from Eli Anderson, proprietor of Wagonland Adventures in Bothwell.

Over the course of five days, 20 wagons, over 150 people and over 100 horses and mules were a part of the trek. Each evening after setting up camp, there was entertainment from cowboy poets, musicians and storytellers in the wagon circle, with a non-denominational cowboy church on Sunday evening.

At the end of the journey, the goal was to recreate a historic photo that was taken on May 8, 1869 of the last wagon train to pass Monument, Utah. A severe injury suffered by Arnold’s wife, Terry, when a mule fell on her forced a change of plans, but a group of people split from the main wagon train and pushed forward to complete the photo reenactment.

Paul Bliss and his wife, Stacy, served as wagonmasters on the trip. They covered between 12 and 14 miles every day, setting up camp at predetermined sites along the way, with teams of mules hauling their supplies.

“We use mules because they work harder for less pay,” Gubler said.

Everyone was assigned a specific duty. Wranglers wore red armbands, while the organizers wore purple bands. Chores like cooking and cleaning were distributed among the group, which was organized to function as a single, moving organism.

“It’s like moving a city every day,” Paul Bliss said. “We became a traveling community. It really knits a group of people together.”

There were some personality conflicts and other hiccups along the way, “the same as at home,” Stacy Bliss said, but everybody got along for the most part and no one was left behind at any point on the trip. The organizers wanted to be as accommodating as possible, which created some potential challenges.

“The biggest problems with any wagon train are dogs, alcohol and guns,” Paul Bliss said. “People wanted those things, so we said if you want to bring a dog, it has to sit on your lap.”

The group stuck to a rigid schedule, starting with a horn blast to wake everyone at 6 a.m. sharp every morning. Breakfast was at 6:30, followed by a camp meeting to discuss any problems or issues from the previous day.

At 8 a.m., people would get in their modern vehicles and drive to the next campsite, then shuttle back to the wagons, “and then it was ‘Wagons Ho!’” Paul Bliss said. The procession started with the old, authentic wagons in front, followed by the replica wagons, with the rubber-tired wagons bringing up the rear. This order would be shuffled occasionally to allow everyone a shot at being in front.

The group practiced “no trace” camping, scattering their animals’ manure, taking all the loose hay with them, and generally “leaving it as good or better than we found it,” Bliss said.

On the final night of the trip, everyone got in a circle, and each person had to sing, dance, tell a story, or give some other type of performance for the entertainment of all.

“It really brought out the talents of the young kids,” Gubler said. “It was great to see some of the shy kids really come out of their shell.”

Gubler said he got into wagon trips out of a long-lasting love of the western lifestyle.

“In my youth I bought a lot of grass for my horse,” he said. “I was so broke that I never did alcohol or drugs.”

Paul Bliss said he and many others who participate in wagon trains are descendants of the original pioneers who did it not for fun, but to find a new home in which to work and raise their families. His grandfather drove a freight wagon, and his great-great grandfather on his mother’s side was part of the Tanner party, one of the first to settle in California. Another distant relative of his was called by Brigham Young to set up a colony in San Bernardino, California, and his great grandfather was involved in the rescue of the Willie Handcart Company in 1856.

“We both come from a long legacy of horsemen and yeomen,” Bliss said of himself and Gubler, who is his cousin.

The Blisses have been participating in wagon trains for more than 25 years, and Gubler has been involved for about 10 years. They travel around the west, participating in historical reenactments, town celebrations and other events.

To add a more authentic feel to the Golden Spike 150 wagon train, some calves and other livestock were brought along.

“In reality, they traveled with cows, sheep and goats,” Gubler said. “To me, it really adds to the ambience to see kids leading cows around.

Another benefit of having livestock on the journey, Bliss said, was the improved dining experience.

“We had veal for dinner instead of mule or mustgo stew,” he said.

“It’s when everything must go in the pot,” he explained.